Woodward’s: then and now

It’s impossible to experience my immediate physical location in precisely the same way in which I experienced it as a barely pubescent youth so many years ago. Nevertheless, as I sit at an upper-level table in the W2 Media Café I sense many ghosts unrelated to the Halloween enthusiasts who occasionally wander through in costume. In this physical space once again, memories flood back of those days in the 1970s, when I was beginning to come of age and Vancouver’s Downtown Eastside community (often DTES in current written reference) was beginning a sharp decline.

The W2 Media Café sits in the south-east corner of what was once a department store. It’s more than just a café, though it is the café that makes up the “storefront”. It serves good food and employs DTES residents. But it also provides, on three levels, community meeting space, broadcasting facilities, office and desk space, training programs and workshops (particularly in media-related activities), public washrooms out of which security won’t throw non-spenders, and provides other services as well. In other words, it’s a sort of high-tech community centre that’s more about providing access to modern cultural and political communication tools to everyone, including those who live in the the area but may not enjoy the privileges that allow them to be full civic participants. The social centre of the new complex, into which the café and other operations face, is an atrium that contains a basketball court as well as Stan Douglas’s large mural Abbott & Cordova that depicts the Gastown Riot of 1971.

The department store, of course, was Woodward’s. In its day Woodward’s, with its big, revolving ‘W’ on the roof, was a landmark and bit of a community centre itself. It was the dominant economic anchor of the community when I was young, particularly after the other major department store, Eaton’s, moved uptown to the new Pacific Centre mall, a tragic failure of urban planning that has been sucking the life out downtown Vancouver’s streets ever since (including the streets beneath which it sits).

As a child I spent a good deal of time at Woodward’s, for my only paternal aunt, Peggy, was a sales clerk at the store. I was born in Vancouver, but I’d been taken to the prairies when I was quite young and I usually spent only my summer holidays in Vancouver. Visits to see Peggy at Woodward’s were common, and often during those visits I travelled downtown to Woodward’s by myself. I used to catch the BC Hydro trolley bus on Fraser, near 37th, adjacent to the Mountainview Cemetary. Back then, the buses were of the old, brillo style, and on rainy days were musty and steaming as they rattled along with a seemingly interminable series of stops and starts.

The Fraser bus stopped right outside Woodward’s, on Hastings just past Abbott. As I remember it, the entrance to the store was on Abbott, and as I rounded the corner I always saw the same plump, upper middle-aged woman in a colourful flowing dress and a hat. She sat on a wooden box against the building’s granite cornerstone, sang or chanted softly, and held out small religious tracts to any passer-by who felt called to take one, her apparently sightless eyes focussed somewhere above my head.

Often I took one of her tracts, though I had no more than a passing interest in their contents. It was she about which I was curious. Part of it was racial: I had never known any black people, except through the unreal filter of a television, but there was something else that drew my interest, and I’m not sure that I know today what that was any more clearly than I did then. Perhaps I wanted to know who she was, where she lived, and what she thought. Perhaps I just wanted to sit down beside her and listen to her sing. I was too cowardly for that, however, and instead, as I sat on the bus later, I read her tract and then left it on the seat for someone else.

Once inside the store, I sought out my aunt, who worked in Men’s Undergarments (or in later years, Purses and Wallets). She was usually busy with a customer, so I would hang around in the periphery, absent mindedly fondling underpants until she noticed me. Once free, she told me what time her break was and then I went off to explore until then. If her break wasn’t too far off, I would hang around the store, browsing records, or stereos, or sometimes furniture. Undoubtedly I was tailed by store detectives on more than one occasion.

If her break was distant, however, and the weather was tolerable, I would often leave Woodward’s and explore the local area. Sometimes I sought out the cobblestoned streets of Gastown, sometimes I wandered up Hastings Street and lingered briefly in the doorway of the intriguing but forbidden Smilin’ Buddha cabaret before I searched through the Army and Navy for treasures, and sometimes I aimed for Chinatown, where there were many curious little shops and cafés to explore. Whichever I chose, I revelled in the feelings of independence and urbanity, and the the diversity of the people, the sights, and the smells.

In the 70s there were plenty of down-and-out and addicted people living in the area. I was wary, and cautious of danger, but I never felt particularly afraid wandering through the neighbourhood, and indeed, I felt far more in danger on the grounds of my own middle school in suburban Winnipeg than in Vancouver’s skid row. In a way, my peripheral experience of the Downtown Eastside probably contributed to my future expectations of what a big city should be, and I loved Vancouver – in small part – for the rough edginess of its inner city.

Of course, that was the 70s. I was somewhat naïve and the Downtown Eastside would deteriorate considerably in later years – due partly, in my opinion, to government policies that, instead of treating suburban social problems in situ, encouraged addicts and the criminals that prey on them to gather in the neighbourhood in a climate of virtual lawlessness, left largely alone as long as they stayed out of richer neighbourhoods.

If I was meeting my aunt for her coffee break, we usually went to the lunch counter in the basement of Woodward’s, near the entrance to the store’s grocery department known as “The Food Floor”. The lunch counter was a long horseshoe-shaped, chrome-and-formica counter behind which waitresses walked back and forth, pouring coffee from glass pots and pulling pencils from behind their ears to scratch orders on slips of paper that they would rip from their pads and stick to a long coil for the cooks to retrieve. I always ordered a grilled cheese sandwich with a pickle, crinkle-cut fries, and a milkshake, a flavour combination that still makes me salivate when I think of it today (though one I tend to avoid ordering).

Other days, I met my aunt for her lunch or dinner break, and we left the store to eat, sometimes with her co-workers, at a nearby restaurant. Most memorable was a few doors up Hastings (or was it across the street?), at the White Lunch Restaurant. Later I would learn that the White Lunch had once been a chain of diners in Vancouver that was reputedly so named because of the racist laws and culture of the day, particularly the anti-Asian laws in various forms. In the 70s, however, the White Lunch had a diverse clientèle that included Caucasian, First Nations, and Asian diners, and a healthy socio-economic mix, too. Woodward’s clerks, business people, hippies, and down-and-outers all occupied booths and counter stools without noticeable rancour or judgement. 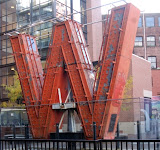 Sometimes I would stay downtown until my aunt finished work and we would go out for dinner, or shopping, and later ride home on the bus to her house. Other times, I caught the Fraser bus on my own. The returning bus passed behind Woodward’s, on Cordova Street beneath the walkway to the Woodward’s Parkade. At the corner of Cordova and Abbott an older man with an accent (Italian? Portuguese?) sat, surrounded in a hut seemingly built of newspapers and magazines so that only his face and hands were visible. He shouted out to rush hour commuters major headlines and implored them to get their news. Occasionally I bought a newspaper, not so much because I wanted to read it (it was difficult to read the large broadsheets of the day on a crowded bus), but because I felt so big city buying a paper from such a vendor. Sometimes I was downtown late enough to see the booth after the vendor had gone home, when all that remained was a small plywood shack, undressed and padlocked, its daytime life extinguished.

After finally closing in 1993, Woodward’s sat empty for many years. Most of the buildings that comprised Woodward’s were demolished in 2006, but not before an uprising by local residents and activists, who occupied the original building for a week during the infamous Woodward’s Squat before being evicted by police. A subsequent tent city that emerged, and lasted for three months, shamed the city into a more progressive and community-focussed development plan, rather than allow the site to simply be turned over to land speculators, saving us, for now, from another soulless Coal Harbour.

Today, only the exterior of the remaining Woodward’s building is original – probably just the upper portions of the east and south walls. The interior is all new concrete and glass, industrial looking, clean. Behind the granite cornerstone sits a bank. The plywood newsstand on Cordova is long gone, and in its corner sits a shiny convenience store called “Express News”. The Woodward’s Food Floor is back, sort of, in the form of Nester’s, which is owned by Buy-Low Foods, which is owned by Jim Pattison. The rest of the complex is occupied by a combination of office space, condos, social housing, and the unfortunately-named ‘Goldcorp Centre for the Arts’, which is also the site of SFU’s contemporary arts programs.

I remember when I felt a youthful excitement about Vancouver, inner cities in general, and about my own prospects. In Winnipeg I watched Woody Allen films and – in comparison to my home – imagined that his Manhattan existed, on a smaller but growing scale, in my Vancouver. Thirty years on, I feel somewhat betrayed, for things have moved in a much different direction than I’d hoped. The town has too much money and too many people who seem willing to welcome increasing blandness and sterility. This is not unique to Vancouver, of course, but I feel the pain of it especially acutely here in my home town.

I’d thought I’d lost for good that youthful feeling of excitement. I had. But I got it back, just a little bit – I got it back this afternoon. Despite the extent of the changes in it, being back in this building, on this streetcorner, is an invigorating experience. I’m no good at being noble, but it doesn’t take much to see that the Visions of the Antons don’t amount to a hill of beans in this crazy town.