Again, awake at the crack of dawn, but sluggish. I didn’t hit the road until noon. A big climb out of the Red Deer River valley started the day, but it was sunny, as usual. 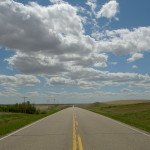 In case you’re wondering, the Achilles tendon is still an issue, but it doesn’t seem to be a monumental one (yet). Riding from Calgary to Drumheller, I found that it started hurting after about 25km. However, regular stops to stretch it a bit, and walk around, seemed to ensure that it never got any worse. A couple of hours after I stop riding, it feels pretty good again. The same today. I am still planning to rest it up a bit when I get to Edmonton, maybe even consult a physiotherapist. It is rather annoying, and I would like to get rid of the pain altogether, if I an going to ride for three more months. I also don’t want to do any real damage.

As soon as I left the shelter of the Red Deer River valley, I was hit with a good, strong crosswind. This only lasted for about 20km, though, and then it became a good, strong northerly headwind, which lasted all the way to Stettler. The wind seemed to grow stronger the closer I got to Stettler, and the last 12km were quite a struggle. I did the work of 175km, but only covered 108km, and had an average speed for the day that was equivalent to riding up Kicking Horse Pass. I’m hoping for calmer weather from the north tomorrow. If not, I will probably make it a 75km day, and arrive in Edmonton on Tuesday.

I saw a lot of ducks on the way, but most were quite skittish and fled as soon as I came within view of whatever pond they were feeding on, which made identification difficult. However, I did manage to spot several Redheads and two Ruddy ducks. I also saw several Mountain Bluebirds, and a pair of Kildeer. Stettler isn’t high on my list of places to return to in future. It’s kind of smelly and quite suburban looking, the mosquitoes are vicious, and the civic campgrounds are reminiscent of a Johannesburg shanty-town full of ridiculously huge RVs. Several of my neighbours have satellite dishes on their rigs, and one is towing his own golf cart.