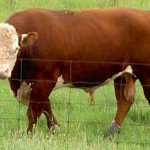 As it is only about 75km to Toronto, I had a leisurely morning, and then departed at about 11am. What was I thinking? Thirty degrees and 1264% humidity, and I start cycling at midday. Naturally, rather than ride slowly and take regular shade and water rests, I rode at my normal rate, which is pretty much non-stop. I’m just not good at goofing off.

I took mostly rural roads all the way to Port Credit, but I was relying on my new, $17, small scale map book of Ontario, which as it turns out is less accurate (and much heavier) than the free large scale folding map that I got from the tourism office, and ended up taking a longer (though very scenic) route around Mount Nemo. Once in Port Credit, I found a “Waterfront Trail”, which is a mostly paved route along the waterfront, all the way to (and beyond) Toronto. Parts of it are very badly signed, so it wasn’t a speedy route, but it wasn’t in the traffic of Highway 5 / Dundas street, so I didn’t mind.

Ah… The clean, crisp air of the Lake Ontario! 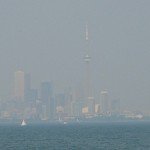 I arrived at the hostel downtown at Church and King at 4:30 with a headache, probably from the heat, and maybe a bit from hunger.

I’d forgotten how big, hot and noisy Toronto is. You have to pay for cultural opportunity, and I guess that’s how.

I decided to forgo non-stop partying in “The Big Ugly” in favour of a shower, dinner, and good nights sleep.