Tired after a night of audible woodcutting, I set out once again. I travelled south to Minnedosa, passing through the valley of the Little Saskatchewan River (labelled on the CAA map as the “Minnedosa River”, for some reason). It was a tough climb out again, one of the steepest grades I’ve climbed, I think: 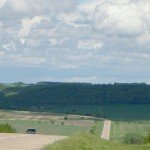 Along the way, I saw a Coot with hatchlings, as well as a couple of Turkey Vultures.

After facing a cross/headwind all the way, I lunched in Minnedosa, and carried on. From here on, I was heading southeast, with the wind at least somewhat behind me. I decided to stop at Gladstone (50km east of Portage La Prairie), where I arrived in the municipal campground to find one motorhome, four other cyclists, and 368 billion mosquitoes.

Two of the cyclists, a couple from Vernon, BC, I had previously passed just west of Regina. They had taken a very similar route to my own, except that they went from Roblin to Russell, instead of through Riding Mountain park. They are riding shorter daily distances than I, but they did not spend a week in Regina, as did I, so our paths crossed again. The other two were a couple from Winnipeg, en route to Dauphin for a few days.

Mosquitoes are not usually a huge problem in southern Manitoba until a little later in the year, but this is one of their wettest springs on record, so breeding conditions are ideal. I don’t usually like to endorse commercial products, but I must say, “Ben’s” bug repellent, which I bought at MEC, works very well. I hate using those chemicals on my skin, and they really eat up the Spandex, but it’s either that or I go crazy and leap off a cliff like those wildebeests on ‘Wild Kingdom’ that are driven to suicide by black flies.

The campground is right next to the train tracks, as usual, with only a mosquito swamp in between. Each time a train goes by, it honks for about a full minute, as there are a number of intersections in town. Also, I didn’t notice it when the sun was up, but there is a big light above my tent which makes a flashlight redundant in the tent at night. And, the local children entertain themselves by racing motorised dirt bikes in the field next door. What kind of idiot parent buys a kid a dirt bike and then sends them out to play? Probably the same ones who go camping with a full sound system and a dishwasher, I suspect.

The good news is that when I woke up (tired again, thanks to the local party crowd), it was sunny and WARM! Finally. After all that preparing myself for the heat of the prairies, I usually wake up freezing.