A couple of months ago I bought Charles Demers’ most recent book, Vancouver Special, and I’ve just started reading it. Published by Arsenal Pulp Press and a finalist for the Hubert Evans Non-Fiction Prize, the book is a collection of essays about Vancouver, mostly centred around its neighbourhoods and cultures, accompanied by some great photographs by Emmanuel Buenviaje. On Demers’ website, he calls the book “a love letter to the city”, though I expect it will not be a love letter in the style of, say, a romantic poet, all gushing uncritically about how great is one’s lover, etc. etc. Besides an author, Demers is a comedian as well as an activist, the latter being more of the left wing bent, if one must be simplistic enough to assign an ideologically-based label. Perhaps I’ll just say that he’s not of the right-wing, chamber-of-commerce-booster bent and leave it at that. At any rate, I expect a love letter well-chocked with irreverence.

Though I don’t yet know precisely what Demers has written (I have heard him read short excerpts in public appearances), I feel like it is probably a book that I would have liked to have written myself. There are multiple reasons why I haven’t, of course, not least of which is that my affection for the city has been dwindling in more or less direct proportion to the city’s growth. For me to have written a love letter to Vancouver in recent years (without relying heavily on irony) I likely would have had to ingest a strong cocktail of psychiatric medications and have done the actual writing from somewhere like Bismarck, North Dakota, where I couldn’t help but recall the assumed charms of the city of my birth, if only based on comparison.

Until this book came out, I had been contemplating a series of blog entries with the working titles of “The Ten Best Things” and “The Ten Worst Things”, about Vancouver, along with accompanying photographs. It wasn’t my objective to compile a simple set of lists, but to actually write essays about the items on the lists, however tenuously. There have been stumbling blocks, though. The “worst” list hasn’t been too difficult. The challenge there has been in paring the list down to a mere ten. It’s the “best” list I’ve been stuck on. Maybe I’m not thinking creatively enough, but I seem to be stuck at three (and one of them is, technically, not even an official part of Vancouver proper).

Fortunately, Demers has done me the favour of rescuing me from this seemingly doomed plan. Reading his book may not relieve me of my desire to write about Vancouver – it may not even relieve me of the desire to write about it derisively – but I have a feeling that it may inspire me. I don’t think it will inspire me to run around town in a Remax jacket gushing with seemingly lobotomised zeal about sports arenas, strip malls, or shitty t-shirt merchants in Gastown (the latter of which I have heard city councillor Suzanne Anton point to as a desirable example of the kind of urban funkiness to which we should aspire. What the fuck is she smoking?).

No, rather, I think that Demers might inspire me to something higher, nobler, more charitable. “Ten Best and Worst” sounds so black and white, so simplistic, so Lettermanesque. Therefore, I have set a new objective for the coming summer. I will undertake to look at Vancouver through new eyes. I will try to see this city through the eyes of the tourist that I often wish I was, as though I were visiting the city for the first time. I’ll visit Vancouver with the sort of vision that I once experienced when visiting Toronto, or London, or Prague, Berlin, Krakow, Salzburg. Of course, I’ll never be able to “visit” Vancouver completely devoid of preconceptions, but I didn’t go to any of those other cities without some sort of expectations either. The difference, perhaps, is that I went to them with at least some willingness to look with open eyes. I was looking for the unknown, the unexpected. I was looking for adventure, and often found it. In Vancouver, I’ve fallen into the lazy habit of focussing on what I already know and despise.

So this is my mission between now and the end of August: to be an inexperienced visitor in my own city. At least twice a month, I will put a tourist map in my pocket, hang a camera around my neck, consult Lonely Planet Vancouver, and then set out to see what this city is all about, looking at every intersection, every building, every puke encrusted alley, as if I’d never seen them before.

Don’t get me wrong – I have no intention of faking an arrival at the airport and then spending time in the same tourist traps that exist identically in every large city in North America. I doubt I’ll set foot in a mall the whole time. But I’ll visit the neighbourhoods slowly, casually, alertly, virginally, looking for the unique, the humour, the sad, the pathetic, the beautiful. I just hope I don’t get taken for an elderly cruise ship passenger and get mugged.

One Last Rant Before I Go All Touristy

Before I head out on this mission, I must make one last habitual gripe about Vancouver, perhaps just to clear the gullet before I take a vacation from my adored scepticism for this town.

I’m sitting in the Vancouver Public Library. It’s a building that I feel like I’d have a hard time appreciating as a tourist. I can’t imagine stepping off of the stupid imitation San Francisco streetcar (a crappy open-air bus painted red with a streetcar bell mounted on it – attention city boosters: this sort of imitation is the sincerest form of provincialism) onto Homer Street and exclaiming “Oh! What a lovely example of Roman architecture. Take my picture, Blanche!”.

I remember, somewhat fondly, the old Vancouver Public Library on Burrard Street. It was turned into a record store when the new Coastal Colosseum was opened. Yes, it was dark, dank, and smelly. Yes, the elevator was slow and jerky so most people used the convenient and central stairwell. Yes, there was limited space for books so sometimes if you wanted a particular title you’d have to fill out a slip and wait while the librarian went to the basement to retrieve it for you. On the other hand, one could easily get a blowjob in the basement washroom while waiting for the title in question.

Then the Colosseum opened. The designers of the place must have been a little drunk during the planning sessions. The elevators are slow and the stairwells are often locked, so using the the escalators is best, but they were installed so that on every floor you have to walk in a circle to get to the next escalator, forcing patrons to walk through departments in which they are not interested. How did that get approved? Even The Bay doesn’t make customers walk through the Underwear department to get to the escalator to Hats and Wallets. Then there are the washrooms. Tiny. I can’t speak for the women’s, but the men’s has one stall and two urinals. The urinals have a nice privacy plate between them so that one doesn’t accidentally glimpse someone else’s penis, but the urinals are jammed into a corner and are mounted so close together that you practically have to stand on the next guy’s foot to take a leak. If he shakes too hard you have to wipe your shoe off on the way out. And, if the guy in the corner finishes first he has to wait for the other guy to finish before he can back out, for the sink counter is so close behind that there’s no room to squeeze through without an accidental goosing. The washrooms are wheelchair accessible, but I suspect that a wheelchair user might have to back his chair in or risk getting stuck trying to turn around.

In a big new building, you might think that they cramped up the washrooms to ensure room for books, but no. They put in expandable shelves. Now, if you want a particular title, you have to fill out a slip and wait while the librarian operates the moving shelves and retrieves it for you.

There are some seemingly great additions to the library. One is workstations with light and power for laptops. Another is private meeting rooms that can be booked for half hour blocks, but can’t be booked in advance, so it’s pretty easy to get one when you need it. There are two on each floor. Unfortunately, they put a wall around them, but no ceiling, so the other library patrons are forced to listen to all the babble and laughter that takes place in these meetings.

The biggest irritation about working in the library, though, has little to do with the building. It’s the other clients. In my day, if you tried to whisper to someone, the librarian would come by and shush you. Now, you have to listen to barely concealed cellphone conversations. Most – but not all – users have the decency to put their phones on silent, or vibrate. But then they answer them. And talk! Generally, few users can be found in the stacks looking for books these days. Rather, the stacks are full of people talking on cellphones.

Recently, I was here working and my deskmate, a young woman, had her cellphone sitting on the desk. About every two minutes it would vibrate, rattling on the desk until she picked it up. She would reply to a text message and put it down again. Then one time it vibrated and she answered an incoming call. She sat there gabbing into it until I blurted out, quite a bit more loudly than I’d intended, “Could you possibly be more annoying?” Sensing hostility, she shortly thereafter packed up and left, much to my relief.

Today, I have a much quieter deskmate. Here he is: 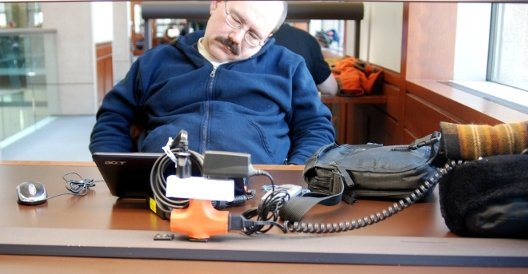 I don’t mind sleepers, unless they’re snoring (as they sometimes do). But check out this guy’s electrical draw. He’s got three devices plugged into two splitters, and none of them are foreign converters. The laptop and cellphone are charging away, but I’m not sure what the third device is, for it’s hidden in his hat. Judging by the curly power cord, though – not to mention his five o’clock shadow – my guess is that he’s got an electric shaver hidden under that scarf. Based on my previous experiences here, I won’t be at all surprised if at some point he pulls it out and starts shaving. On past visits, I’ve had deskmates pick their noses, pop their zits, apply makeup, and clip their fingernails quite unselfconsciously. Oddly, this sort of thing is apparently acceptable but getting a blowjob in the privacy of the washroom is frowned upon.

On the other hand, the place does have its good points. It has loads of natural lighting and it has a fairly neutral smell. What else does a 21st century library need?