Tokyo: Ikebukuro and beyond

A small restaurant just outside the city centre. At a table in the middle of the room sits a beefy young man with t-shirt sleeves rolled up, a pack of Marlboros and a Zippo on the table in front of him. On the wall behind him, a poster, one of those old black and white pictures of dirty young men digging into their lunchboxes while sitting untethered on a girder hundreds of feet above what will become Rockefeller Center. Over the restaurant’s sound system comes the voice of Elvis Presley crooning Always on my Mind. In the corner, a man with a sweaty forehead flicks a cockroach off the wall behind him while he waits for a cheeseburger, fries, and a lemonade. 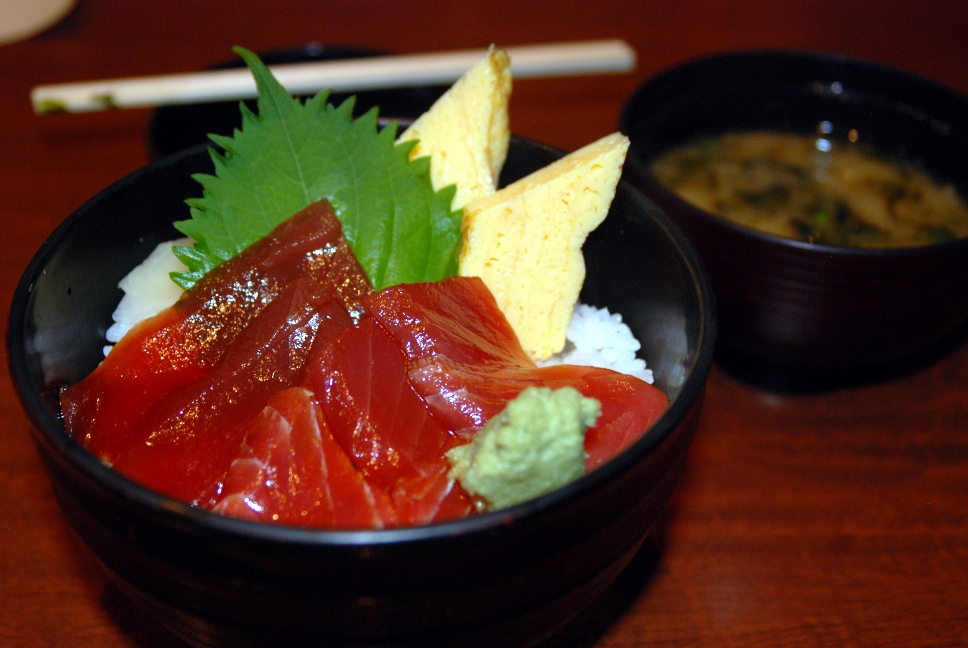 Specifically, the “Freshness Burger” just up the road from the Nakano JR station. Nakano is an off-the-beaten-track neighbourhood not frequented by the mainstream tourist. I’ve been sticking with Japanese food (well, Asian food – I think I had Korean last night, but since I couldn’t read the menu, I’m guessing about that), but after spending an hour wandering around the Broadway Shopping Arcade, my blood sugar was low and I felt the need for something fast and easy.

It’s not that Japanese food is that difficult. After all, I live in Vancouver and have probably eaten at least five times my weight in sushi already. The challenge is largely linguistic. Most of the restaurants I eat at have no English on their menus, but they usually have pictures of the food, so I just point to things that look appealing.

Twice now I’ve eaten in restaurants that had no pictures, so I had to pick something by pointing at text that, for all I knew, might have said, “Federal tax will be applied to all checks”. There is some risk involved, though I suspect it’s not serious. My fear, though, is that in my ignorance the waiter will bring me a plate on which a large pufferfish sits staring balefully up at me while the other patrons, all locals, look at me admirably, mumble amongst themselves, and then go back to eating their yakisoba. As it turned out, the first of these attempts resulted in a very plain, but tasty, bowl of noodles. The second time, I got a bowl of rice and sashimi (tuna, I think) and miso soup. Here it is for your enjoyment:

From what I’ve written so far, it seems to me that two things demand explanation. One is my use of “checks” instead of “cheques”, which under normal 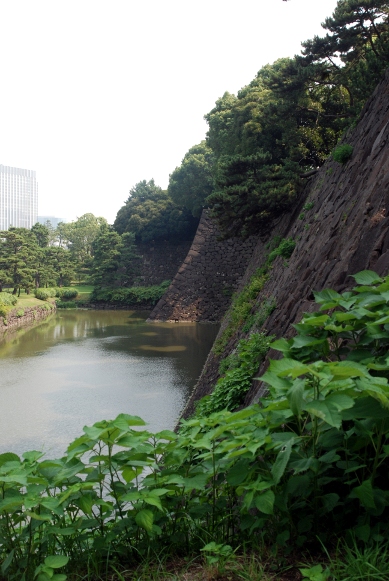 circumstances I would be loathe to do. At the risk of offending my American friends, I consider their spelling of the word for a promissory note to pay as a “check” to be a sign of wilful illiteracy of the worst example. I think it’s admirable to establish one’s new republic based on the sort of egalitarianism not practised by one’s former colonial master, but a new country should aspire to “be”, not to “not be”, and adopting ridiculously simplistic and confusing spelling just to be different seems absurd and, potentially, destructive to one’s ambitions. If the American empire is in decline – and given the line-up of proposed candidates for the leadership of the nation’s apparently ascendant party, one must conclude that the decline is now one of free fall – I would assert that the fault lies entirely with the unfortunate decision to adopt language that confuses financial instruments with the patterns on one’s boxer shorts.

I won’t go on about this subject, except to say that I’m extremely disappointed in the Japanese – the people who dress their daughters in British sailors suits for elementary school – for adopting this American misspelling over the clearly superior British one, for I see it all over the place. “Where?” you might ask. Usually at the bottom of menus, though they are frequently the only English words on them, besides “Menu” and “Drinks”.

The other thing that perhaps deserves amplification is my reference to the “Broadway Shopping Arcade”. Normally, a mall is the last place I’d be found anywhere, even in my own city, but I heard about this one while reading about Nakano and decided to take a look. The arcade itself is nothing to write home about (though I suppose that is, in effect, what I’m doing), but off to the side of it is a small network of winding alleyways full of tiny restaurants and bars, many of which would only hold a dozen people at most, some fewer. It was pretty quiet during the day, but I suspect that it’s probably a hopping place at night.

Best of all, though, is that at the far end of the arcade is a dingy old mall consisting of several floors laid out like rabbit warrens. The place is full of small shops that sell all kinds of oddities, dolls, clothes, comics, and food. The largest retailer, it seemed, is something called “Mandarake”, except that it wasn’t just one store. The were all kinds of peculiar little shops, which may or may not have been Mandarake-specific (some seemed more like small museums), seemingly independent of each other but maybe weren’t really. According to Wikipedia, Mandarake is “one of Tokyo’s largest vendors of used anime and manga-related products”, and their own site claims that they are “the biggest and busiest manga and anime place in the world.” 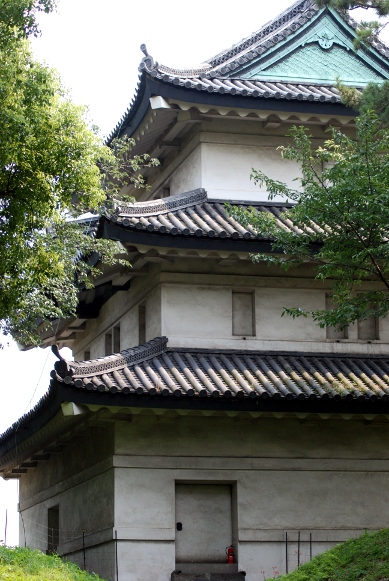 While in the mall, I picked up a couple of t-shirts of a type that seem to be worn by young people all over Tokyo: shirts that have English words on the front that make no sense whatsoever. It’s like someone generates phrases comprised of random English words and makes shirts. I haven’t been taking a lot of pictures in Tokyo, which is not unusual for me, for I tend not to want pictures of things that I can find 30,000 different views of on Google Image, but since I got here I’ve felt like photographing the shirts that I see people wearing on the street. I don’t of course, for that would be a little intrusive (not to mention lechy).

I’ve been gallivanting all over town, since I bought a refillable transit pass that lets me ride all the trains, subways, and buses in metro Tokyo. I’ve ridden at rush hour several times and I haven’t found things as crowded as western media makes it sound. Yes, there are white gloved attendants in the stations, but I haven’t seen them shoving people into trains. I can also safely report, with some disappointment, that no one has yet groped me in a crowded train car.

Considering that the the population of metropolitan Tokyo is roughly the same as that of all of Canada, the level of cooperation and the efficiency of transportation is highly impressive. I have seen not one incident of road rage or expression of anger by anyone, anywhere. I have seen only two vehicles being driven in what I would call an aggressive manner, and both of those were being driven by Caucasians. The metro station in my neighbourhood, Ikebukuro, handles a million passengers a day. I’ve been through that station several times a day since I’ve been here, and it’s a model of social cooperation. There are people walking in all direction – it looks like the inside of a beehive. Compare that to Vancouver’s SkyTrain: the entire system handles only 380,000 passengers a day, but if two people are riding an escalator at the same time, the odds are good that one’s going to be irritated by the other in some anti-socially apparent way. I realise that they have their own unique cultural issues, but we have much to learn from the Japanese.

Among the other places I’ve wandered is the garden of the Imperial Palace, with its moat and sloped stone walls, as well as the Fujima-Yagura. A yagura is a 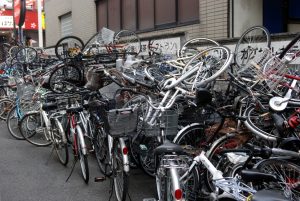 building for storage, and this one, apparently, has a limited view of Mt. Fuji from the top.

I also went to Akihabara, which is the traditional neighbourhood for electronics. It has become a bit of a mecca for gamers and anime enthusiasts so it’s full of young (and old) geeks and nerds (the Japanese word, apparently, is otaku). I found a narrow, six floor mall stuffed full of tiny stores that were themselves stuffed full of every electronic part or component you might seek, from capacitors to server cases. Alas, I was unable to find (at a price I was willing to pay) what I came looking for: a battery operated, pocket-sized cellphone signal blocker.

As I was leaving there, a huge thunderstorm descended on the city, with thunder so loud it echoed deafeningly between the buildings, and everyone on the street stopped to look up. Then, the clouds opened and a deluge of rain fell. People ran to awnings and the elevated train tracks for shelter. I personally ducked into the nearest store, which turned out to be the “Love Merci Adult Amusement Park”, five floors of every sex aid you can imagine, including one floor containing nothing but inflatable, anatomically functional dolls. Curiously – or not so curiously – all the dolls were female. The sex shop was unlike Canadian ones. It was clean, had friendly staff, there were male and female customers who seemed to be shopping without shame, and there were no peep show booths in the back with sticky floors. (I’m not sure if that last bit is an endorsement or a complaint). 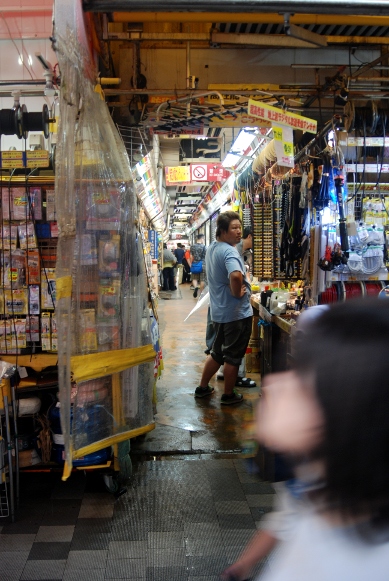 Speaking of cellphones, this is another area in which Tokyoites are superior, in my opinion. Everyone, it seems, has them (as is the case almost everywhere in the world now) but they are very polite with them. Not once have I seen anyone talking into a cellphone in a restaurant or on the subway. In fact, there are signs on the subway asking people to put their phones on ‘silent’ and refrain from making or receiving calls. They’re all texting, to be sure, but it’s quiet. In fact, for the world’s largest metropolitan centre, Tokyo is surprisingly quiet. Car horns are seldom heard. People converse in civilised tones. The only place I’ve noticed an inordinate amount of noise is inside the ubiquitous pachinko parlours, which appear to be casinos full of slot machines. According to my friend Guy, from Sechelt, whom I met up with here, it’s all just in fun, and that gambling isn’t legal, but that if you know how it is possible to redeem your winnings for cash on the black market. I won’t be finding out, of course, for I’m too cheap to gamble. If I wanted to throw my money away I’d just flush it down the electric toilet with the heated seat in my hotel.

I haven’t done any cycling here, but it seems like it wouldn’t be too difficult to steal a bike if I were so inclined. Tokyoites seem to leave their bikes unlocked, or with minimal security, all over the place, and there are a lot of them, everywhere. In fact, today I happened across this peculiar scene in Nakano: