The water is the least I have to worry about…

As I was about to depart Sauble Falls (at my usual early hour of 11:45am), I met three local cyclists out riding the peninsula, Colleen, Dave, and the Other Dave. After a brief chat, Colleen and Dave invited me to camp in their yard should I make it through their town, Elmira, which is slightly north of Kitchener-Waterloo. Other Dave also offered to put me up for a night.

Just a few kilometres up the road from Sauble Falls (the “falls” are a three-foot concrete dam across the Sauble River) is Sauble Beach, which is both a beach and a small collection of beach resort shops that sell crap to the tourists. The beach itself is quite nice, great soft sand, and one might think one was in California. Inexplicably, however, driving on the beach is permitted, and rather than put a blanket down at the water’s edge, locals drive their minivans right up to it. Too weird. 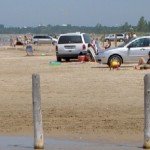 I guess you are supposed to change into your swimsuit in your vehicle, as there are no change rooms, so I changed behind my bike, which only really prevents half the beach from watching. By the time I’m done, my buttocks will have been viewed by residents of each province in Canada. At least no one is complaining.

Ever since I arrived in Ontario, my rear brakes have not been working. When applied, they stick on, which is a bit of a drag, to say the least. I have had them apart, but have not managed to fix it, so I just loosened them off, suspecting a partly seized cable, or some such problem. Today, while passing through the lakeside town of Southampton, I stopped at Martin’s Bike Shop, recommended by Colleen, Dave and Other Dave (and the only bike shop I’ve seen). Martin, who goes by the name of Brett, looked at it and decided that the cable was calcified, and replaced it for me. He was wonderfully friendly and helpful, and dropped what he was doing to help me out. Sorry, Wenting’s but I think I have a new favourite bike shop. And, Brett wouldn’t even accept any payment!

Before I left I asked Brett to recommend a good place for lunch and he sent me a few doors down to a place run by his friend Armand called, simply, The Café. Apparently Armand spends his summers in Southampton and his winters in the interior of BC. I had a hummous and tomato sandwich on foccaccia with a pasta salad and a cup of tea. It wad the best lunch I’ve had since The Truffle Pig in Field, BC. And, when I was done eating, Armand gave me a great piece of nut-free carrot cake, on the house! I spoke to a few other people in town too, and they were all amazingly friendly. Pack my stuff, I’m moving to Southampton. Here’s a picture of the main street, from down by the lake (downtown is not visible, but it’s just up over the rise): 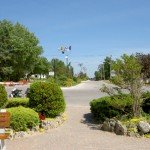 I spent the rest of the afternoon riding, passing through Port Elgin before heading inland to Paisley, where I had planned to turn and head toward Durham but missed my turn. So, I ended up in Walkerton. I’m actually a few kilometres north-east of Walkerton, toward Hanover, in a small tent & trailer park. It’s one of those places run by someone that you just know had to drag themselves away from Wheel of Fortune to come out to the front, flash their toothless gums and ask what you want.

The main area, where all the trailers are, is eerily quiet and has a small picnic area with a children’s swingset, with two children on it. But wait, those aren’t children – they’re stuffed, child sized dolls that look frighteningly like Chucky and his bride. They are guarded by a dog (not stuffed) that looks like a cross between a Corgi and one of those long-haired daschunds of the type that once tried to attack me in downtown Toronto many years ago. (Its’ owner, hauling on the leash as if she were restraining a pack of hungry Rottweilers, said, in a sinister east-European accent, “Don’t worry, he’s very gentle”, though his dripping fangs suggested otherwise. But, I digress).

The tenting area is down a slope beside the Saugeen River, where I am all alone, except that once every couple of hours someone in a red car drives their little daughter down here to use the outhouse. All in all, this is shaping up to be a remake of ‘Night of the Living Dead’, and the full moon tonight isn’t helping.

Maybe it’s just because it’s Walkerton, or maybe it’s the tinny smell and the floaties, but I have a suspicion that the water that comes out of the taps in the lower campsites comes straight from the Saugeen River. I’m not normally very susceptible to intestinal-type problems (unless I at eat at KFC), but I walked up to the trailer park level and used one of the taps there. However, I boiled it for a while before consuming it.