Something to (not) chew on

A couple of weeks back, as I was cycling out to Wreck Beach, my front fender started to make a hell of a racket, so I pulled over to check it out. As it turned out, I’d run over a piece of chewing gum that someone had coughed up onto the roadway. It was firmly stuck to my tire, and with each revolution it hit the edge of the fender and caused a clatter. In order to solve the problem it was necessary to pull the spitty, gritty lump of gum off with my fingers, which was surprisingly difficult for a warm day. After that I had to dislodge it from my hand which, in the absence of any useful implements, involved rubbing my fingers against the curb on Highbury Street. (If that doesn’t move you to search out a trash can the next time you need to dispose of your gum, then think of all the people with wheelchairs who experience the same trauma but with less convenience.)

Of course, the trauma was not so great that I now belatedly feel compelled to blog about the subject, but I thought of it now because I’m once again visiting Singapore, the only country in the world – that I know of – that has banned the import and sale of chewing gum. I remember when the ban was first implemented, in the early 1990s. At the time I knew absolutely nothing about Singapore and thought the ban an absurdly draconian example of Orwellian excess. I envisioned secret police sneaking around in trenchcoats nabbing schoolgirls with suspicious jaw movements, girls who were then dragged off to Room 101 for interrogation.

When I first visited Singapore in 2008 I wasn’t too worried about the chewing gum law, since I don’t chew gum. However, I remember that in grade six (that would have been about 1975 or so) I was accused by my teacher of chewing gum and told to come to the front of the class to spit it out. The trouble was, I wasn’t chewing gum. Somewhere along the line I’d picked up the nervous habit of making chewing motions with my mouth, unconsciously acting as if I were chewing gum. I didn’t even know I did this, but one of my classmates apparently did, for he spoke up in my defence, explaining that I always chew my tongue. 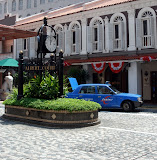 A typically colonial scene in Singapore, this one in Little India

I know, a little weird. What’s even weirder is that I still do it. Not constantly or anything, in some kind of way that screams for a lithium prescription, but every once in a while I notice that I’m chewing nothing. It’s usually when I feel like I’m being observed in a moment of inactivity, such as when I’m on my bike at a red light and there’s a car full of people next to me. I suppose it’s the same social akwardism that makes me put my hands in my pockets, or reach for my key ring or some other handy object, when standing at a crosswalk waiting for a light to change, as if I’m somehow more vulnerable and exposed with empty hands. (Interestingly, I can’t recall ever having felt this sort of exposure when naked in public).

Anyway, I was on a bus yesterday, one of many buses I was on yesterday in a three-hour attempt to locate the Changi Prison Museum (thanks for the great directions, Lonely Planet), when I noticed that I was busily chewing nothing at all, and it occurred to me – possibly because right above me there was a sign encouraging citizens to call the police immediately if they see anyone suspicious – that possibly this mock chewing of mine could attract unwanted attention.

I never got hauled off to the gulag, but neither did I find the museum. Toward the end I spotted an imposing white building surrounded in chain link fence topped with three strands of barbed wire, with a heavily fortified guard shack, and thought I’d finally found it, but it turned out to be The Japanese School, which was sort of ironic since the Changi Prison Museum’s primary focus is the atrocities committed against POWs during the Japanese occupation in World War II. In the end I gave up and left it for another day, and made my way back to Little India for an afternoon snack.

Today I was much more successful in my quest to visit the Bukit Timah Nature Reserve for a little jungle birdwatching. With 600% humidity I was already well-moistened by the time I walked the short distance from the bus stop to the reserve gates, and by the time I’d ascended to the summit of Bukit Timah – Singapore’s highest hill at 165 or so metres, I was dripping wet. After traipsing all over the reserve, I’d only spotted three birds, and managed to identify only one of those (a Crimson Sunbird). I’d seen more birds outside of the Plaza Singapura shopping mall on Orchard Road, but I still enjoyed being in the jungle for a while, listening to the cicadas and looking at all the unusual insects, like Giant Forest Ants and something that looked like an earthworm with 100 legs that moved like the wind. Now I’m back at the hyper-colonial Raffles Town Club (where I feel more like a trespasser than a guest), preparing for a dip in the pool before I head out in search of a hawker stall for my evening meal.