It’s snowing in Vancouver today, and if you’ve even been here you know what that means: innumerable diatribes about how Vancouverites don’t know how to drive in snow. It’s an absurdly tiresome bit of small talk that is simultaneously both accurate and bullshit. 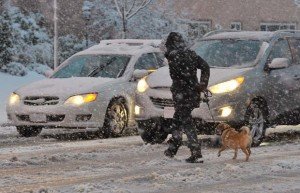 Too implausible not to be a staged photo! From the Vancouver Sun: “Traffic stops to let a pedestrian cross at a crosswalk on Cambie street. Photograph by: Ward Perrin, PNG”.

Usually, the people relating this opinion once lived somewhere else in Canada where snow is a more dominant aspect of winter (ie: almost anywhere else in Canada). The funny thing is, almost everyone in Vancouver is (at least perceived to be) from somewhere else. I couldn’t guess at the number of times I’ve been at a cocktail party or some such and, after being asked where I’m from and answering “here”, been told once again what a rarity I am, like I’m a goddamn Ivory-billed Woodpecker or something (I’m channelling Holden today). Why, if I had a nickel for every time I’ve heard that, I could afford to move somewhere that has both snow and culture.

If those of us who were born here are such rarities, who the hell are all those people out there slippin’ and slidin’ and bumpin’ their cars into poor unsuspecting ex-Saskatoonians?

I should mention that yes, while I was locally bred, I learned to drive in Winnipeg, the epicentre of cold and snow in southern Canada. If you’ve never been to Winnipeg, the only hills (besides an old garbage heap that was eventually turned into a park) are on bridges, overpasses, and underpasses, all of which are liberally coated with enough sand and salt to build a dozen new beach resorts on the Dead Sea. (In the spring, once the snow has melted, the city has machines to remove the sand dunes that have collected on boulevards over the winter).

I’ll tell you who all those “bad” drivers are: righteous central Canadians who think that they should not only drive, but continue to drive 25 km/h over the speed limit regardless of conditions, whether they be rain, snow, sleet, or dark of night (or most especially, all of those combined).

Never mind that Vancouver – quite justifiably for the miniscule quantity of snow we typically receive – doesn’t have an established infrastructure for ensuring your ability to imitate Mario Andretti on your way to the dog park. Never mind that prairie snow is typically dry and tends to pack into a tolerably textured driving surface, while Vancouver’s wet snow tends to pack into skating-quality ice the more you drive on it.

Now, here’s something we can all – easterner or westerner – legitimately mock with abandon: 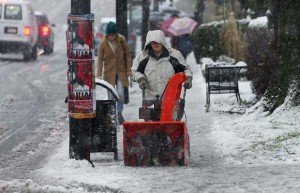 On Granville Street. From the Vancouver Sun. Photograph by: Ward Perrin, PNG”.