Dark clouds were hovering, the sun poking through only occasionally, and the weather report showed rain everywhere between Prince Rupert and Winnipeg. I packed, and dressed, expecting rain, and left Consort at 9:30 with the tailwind still my companion. However, it was regularly shifting to a cross-wind, so I didn’t make as much speed as yesterday. Cross-winds are also hard on the arms and shoulders, as there’s a lot more work to keeping the bike going straight (especially when large trucks are passing). After I have my foot looked at I may also see about getting a massage in Saskatoon. I’m getting some nasty knots in my shoulders.

Highway 12 has a great, wide shoulder (right from Stettler) and very little traffic all the way to the Saskatchewan border, on the Alberta edge of which sits a very small town called “Compeer”, where I stopped for lunch.

I ate at the only place in town, the “Compeer Saloon”. I asked the barmaid if she had any juice, and she took me into the walk-in cooler behind the bar to look for some. The saloon is very peculiar (at least from a west-coast urban perspective), with metal doors, small barred windows, and a sign advising zero-tolerance toward barfights. There is a grill on one wall, where patrons can grill their own steaks. It was on this grill that my chicken burger was prepared, or rather, heated. It was a tiny, deep-fried looking disc that was placed on a tiny white bun with a tiny piece of iceberg lettuce. It came with zucchini sticks. As I was leaving the saloon, a woman got into an old Chrysler K-Car that was parked next to my bike, started it, drove over to the feed store, and got out. Total drive: 35 feet.

Entering Saskatchewan using this route is pretty low key. If it weren’t for the “Welcome to Alberta” sign for westbound travellers, one might not know one had crossed a boundary. The closest thing to a ‘Welcome’ sign was this advertisement for the local crime watch program (note the bullet holes): 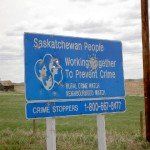 There was also a significant decline in the quality of the highway. The shoulder disappeared entirely, there were plenty of potholes, sink-holes and missing patches of asphalt, and the surface was very bumpy and warped, all of which, along with the now predominant cross-wind, conspired to slow me down. The good news was that the minimal traffic seen on the Alberta side dwindled down to almost nothing. I don’t think I saw more than twenty vehicles the next 65km. 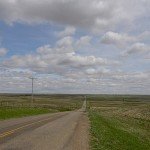 I saw a large number of skittish Shovelers along the way. I am still flushing them regularly (I think my bright yellow jacket isn’t helping – I also startled two horses today.) I also saw another American Avocet. A number of shorebirds and several potentially interesting ducks were bypassed for reasons of practicality (wind, mainly). There are many Western Meadowlarks as well.

After passing by the towns “Major” and “Superb”, neither of which appeared to be aptly named, I arrived in Kerrobert at about 4pm. The first thing I did was seek out the tourism information office, as I had no copy of a Saskatchewan accommodation guide, and had no idea where to stop for the day. I had hoped to make it another 37km to a town named Kelfield, but I didn’t know if that was an appropriate place to stop. I was advised by the town hall that the only place that had such information was a store on the corner near the curling rink that sells curios, but it is doesn’t open until Thursday.

After having tea at the town bakery, contemplating my next move (keep going, or spend the night here), I decided to stay. The only place to camp was the town RV park, which was right next to the gas station, and empty except for three picnic tables and a dumpster, and a local youth was roaring back and forth behind it on an ATV.

I selected the “Wild Goose Motel” as my bed for the night. It’s one of those standard small-town hovels, staffed by a woman who gets out of breath swiping a credit card and whose vocabulary seems limited to grunts. My room has green shag carpeting that is highlighted by fluorescent lighting that was surely intended for use in a tanning salon.

There appear to be three restaurants in town: “Jimmy’s”, “Ma’am’s”, and an unnamed place in the other hotel (that I rejected due to its ugly aluminum siding), connected to a busy cold beer off-sale counter. Jimmy’s slogan is “A meal without wine is like a day without sunshine”. Anita Bryant flashbacks aren’t an appetite stimulant for me. I chose Ma’am’s. It met my expectations perfectly.