Phantom of the Paradise

In 1974, a destined-for-cult-status campy rock musical written and directed by Brian De Palma was released to a great flood of inattention: Phantom of the Paradise was a bit of a flop. De Palma’s eighth film was successful in only one North American market, which just happened to be my market at the time – Winnipeg.

I was twelve years old when the film was first released in Winnipeg, and I seem to recall seeing it at a drive-in theatre, though my memory may be sketchy on that detail. Unsurprisingly for my age and place in the world, I was then oblivious to the film’s now obvious allusions to Phantom of the Opera and Faust. That didn’t stop me – and a reputed 20,000 other Winnipeggers – from buying the soundtrack album, though. 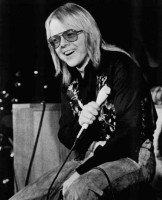 The score to Phantom was written by Paul Williams, who also played the role of the satanic record producer, “Swan” (and sang three of the songs). Williams gained much greater fame three years later as Little Enos Burdette in the very undeservedly much more successful film, Smokey and the Bandit (and its two repellent sequels.)

Eventually, as happens, the novelty wore off, and Phantom became less frequently selected from my shelf of records. In one of my batch album purges of later years, it got carted off to who-knows-where, unnoticed, and I forgot all about it. Until 2008.

I was in a writing group in Vancouver in which we met in each others’ houses and compared notes about our notes, or about our dearth of

them. On one such occasion, the host writer’s eighteen-year-old daughter was upstairs playing music, and on a trip to the lavatory I passed her door and heard Special to Me emanating from within. “Is that Phantom of the Paradise?” I asked. She was surprised that I knew it, and I was surprised to bond over music with with someone under sixty for a change.

Meanwhile, Winnipeg seems still to be enamoured with all things Phantom. On November 1st, the next Phantompalooza event, Phantom at the Met, will take place. Dinner and a movie, for $40. There’s a fan page, which asks the question, “Why Winnipeg?” and, of course, a Facebook page.