Okay, I’m a little behind in my travel blogging. Maybe it’s the heat. Or maybe it’s the food. There’s been a lot of food. In fact, this whole trip has mostly been

about eating. Of course, one can’t eat continuously throughout one’s waking hours, so we’ve filled in the non-eating periods with other activities, like digesting, researching new places to eat, and visiting cultural sites. My companion has been the driving force behind the relentless pursuit of food, but I’m more than happy to participate.

A brief historical preamble: Unlike the rest of Malaysia, a slight plurality of Penang’s population is ethnic Chinese, closely followed by ethnic Malays. Also well represented are Indians, primarily Tamils. Ethnic Chinese arrived on the Malay peninsula sometime in the 14th century and their descendants are referred to as ‘Peranakan’. The culture and unique language have largely disappeared, as their numbers have been dwarfed by the influx of larger numbers of Chinese since British colonisation. What has not disappeared to the same extent is Peranakan cuisine, also called ‘Nyonya’ cuisine, which comes from the term ‘Nyonya Baba, which is more or less a combination of the words for ‘Ladies’ and ‘Gentlemen’.

That’s enough dry history. On to the wet food. Some of the Peranakan dishes I tried I thought we’re okay, but the one I liked best is ‘Laksa’, which can be found all over the place, in various forms. The most common, perhaps, is ‘Assam Laksa’. Essentially, laksa is a bowl of soup noodles. Nothing unusual about that in Asian cuisine, of course, but as far as I can tell, it is the spices and other ingredients that make it unique – some combination of Chinese, Malay, Indonesian, and possibly Thai influences. I ate assam laksa several times. It’s a seafood soup, typically (I think), not exceptionally spicy, though it does have some small hot chilies in it. It is sort of sour, presumably from tamarind.

Another dish I soon came to favour, though not Peranakan, was Char Kway Teow, which is rice noodles fried in pork lard with assorted other ingredients, especially cockles and pieces of sausage. I can’t imagine that one would want to eat this on a regular basis, unless one wishes to develop a physique in the style of Mao Zedong, but it sure is tasty.

My favourite place for both of these dishes was a little hawker market on Penang Road called ‘Joo Hooi’.

I also enjoyed an ample supply of Mee Goreng, another fried noodle dish, a bit spicier and – possibly – a bit healthier, and of course, thanks to the Indian population, plenty of dal, tikka, and tandoori. I tried a bowl of chendal, which is sort of a dessert that I didn’t think I’d like much, but turned out to be pretty good. I think it contained tapioca, coconut milk, and taro, and I don’t know what else. But that’s not all I ate. There was also Pangan chicken, a betel leaf salad, sea bass with lime and chili. The only ‘western’ thing I’ve eaten is breakfast. My hotel provided each morning a staid English breakfast of eggs, ham, beans, fried tomato, and toast. Since I

skipped most of the monuments to colonial imperialism in Penang, breakfast was my token acknowledgement of that part of the history.

Of course, there’s more to Penang than food. There’s drink. At Joo Hooi I had the only thing in Penang that I did not care much for: a glass of olive juice. It wasn’t horrible, but it seemed an unsatisfying combination of sweet and salty and wasn’t particularly refreshing. After that, I stuck to lime juice with lunch. I also discovered a taste for the local “kopi”, which is a thick, strong, sweet, creamy brew apparently made from coffee beans that have been fried in butter instead of roasted traditionally. Owing to the heat, I’ve also taken to drinking ‘ice cream coffee’ after lunch and, occasionally, a mojito in the

early evening, especially when sitting at an oceanside cafe at a place called “Beach Blanket Babylon” and, once, at the “Eastern and Oriental Hotel”. It’s an absurdly colonial place where some members of the staff actually wear pith helmets and stirrup pants, but we stopped for a drink in the hopes that we’d plunk our asses down in the same chairs that Rudyard Kipling and Joseph Conrad once sat in.

We also visited the Peranakan Mansion and Khoo Kongsi, both of which represent aspects of Peranakan culture as well as cross-cultural influences. I’ve already mentioned the trip to Batu Ferringhi. We also took a day trip out to Balik Pulau, a small town somewhere mid-island where we failed to find whatever it was we’d set out to find but ate some more laksa, and on the way back from there stopped at the Kek Lok Si temple. Apparently it’s the largest Buddhist temple in southeast Asia, and parts of it are impressive, but it’s also riddled with gift shops which, while I suppose they help fund the upkeep, seem to detract from things by their numbers. 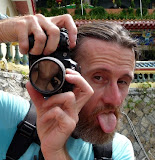 Despite the apparent anarchy of the traffic, things seemed to be moving quite efficiently and I was surprised not to have seen any

accidents despite the obvious craziness, like the motorcycle I saw weaving in and out of fast moving traffic that had two women sitting on it with a small child standing, helmetless, on the gas tank, or the man on a motorcycle squeezing through a narrow space between a bus and a taxi at 30 km an hour, steering with one hand and talking on a cellphone with the other. The illusion of efficiency somewhat dissolved, however, at the bus station in Balik Pulau, where the bus company has posted, on a sign board next to the bus schedules, graphic pictures of accident scenes that involved buses. I suspect that the pictures were meant to encourage safer driving by motorcyclists, who seemed to be the primary victims, but I’m not sure that showing your customers pictures of severed torsos and dismembered limbs is an ideal marketing tactic.