On Liberty, and Memory

Remembrance Day, as it is called in much of the commonwealth, is coming up again, about a month from today. In the US it is called Veterans Day; in France, Armistice Day (Jour de l’Armistice). Officially, it marks the end of World War I, though in modern convention it is a remembrance of life lost in both world wars, as well as to those who died in other military activities, such as the one currently taking place in Afghanistan.

Remembrance has probably been in constant decline since World War II, and that’s unfortunate. I’m talking about real remembrance, not just throwing a plastic flower on our lapels on the way to the mall, an act which for many of us is probably inspired more by habitual adherence to custom, or sub-conscious concern for what others will think, than by a truly conscious act of remembrance. 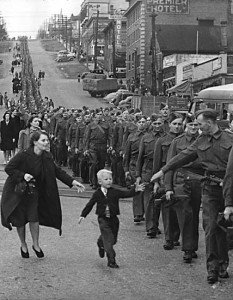 This Remembrance Day, why not try to remember in a more attentive way? I’m not talking about getting in your car to drive downtown to stand around at the Cenotaph for a few minutes trying to listen to barely audible speeches while shivering. If that’s your bag, go ahead, but if it isn’t your thing, that’s OK. I understand fully. Standing around in a crowd of inattentive, latte-sipping people while parades of tragically militarised children are marched up Cordova Street and warplanes are buzzed overhead isn’t my thing either. I just ask that you replace it with something that is meaningful to you.

It need not involve going downtown, or being an all-day project. In fact, perhaps the best thing you could do is just sit down in your living room, or your yard (perhaps just after 11am, but whenever is good too), and spend a few minutes thinking about war, and peace, and grandparents, and great grandparents and what it was like, regardless of whether they were getting shot at in western France or supporting the effort from home and facing an uncertain and terrifying future. Think about all the legless, armless and headless children of those wars, and of wars occurring right now. Do it alone, or sit with your family or friends and talk about it, or read something. Even if all you do is Google war and spend twenty minutes following and reading Wikipedia links, that’s twenty minutes thoughtfully and productively invested in real remembrance.

One of the more commonly heard expressions about war and remembrance refers to men and women “who gave their lives that freedom might prevail“. Yes, it’s vitally important to take the time to remember those people who gave their own lives, limbs, or health to preserve those freedoms that provide us with all of the privileges that we enjoy today. But simply remembering is not enough. Along with the moral responsibility to remember and honour, there is also a responsibility to continue to preserve and defend those freedoms. Failure to do so, in my opinion, makes all the cenotaphs, wreath-laying, plastic poppies, and war-amps key tags worthless.

When I speak of continuing to defend freedom, I do not refer to the act of sending troops to overseas countries to, ostensibly, fight for the freedom of others and, by extension, all of us. That addresses an area of foreign policy that deserves open and thoughtful debate, but that I am not attempting to address here at this time.

Rather, I refer to the defense of freedom here at home.

It is easy for us to overlook, when it does not affect us personally and directly, the ways that our freedoms – that others died to preserve for us – are being abused and eroded.

In British Columbia, local governments are stomping all over our freedoms with barely a peep of protest from the bulk of citizens. For instance, the Liberal government introduced in the legislature a bill, innocuously titled the Miscellaneous Statutes and Amendment Act, that contains the subsection The Municipalities Enabling and Validating Act. This act will allow municipalities in which olympic events are taking place (Vancouver, Richmond, and Whistler) to enter private property to remove or cover up signs.

Although the act does not specifically mention the olympics or indicate what kind of signs are subject to censorship, it does specify that the municipalities will be granted these powers for a fixed period of time, from February 1, 2010 to March 31, 2010, the period during which the olympics will take place. For more info, see the CBC report, and the text of Bill 13.

The city of Vancouver (led by BC’s own Marshall Pétain, Mayor Gregor Robertson, who speaks publicly about being “pissed” when cyclists hold up traffic but is remarkably quiet about the destruction of liberty) is collaborating by introducing bylaws to complement the provincial act. In addition, bylaws have been prepared that will limit the rights of citizens to carry out certain activities on city streets. Among these are handing out leaflets, holding signs or advertising anything at all that isn’t VANOC approved.

But that’s not all. The Vancouver Police have been hanging out in the downtown eastside of Vancouver, site of Canada’s poorest urban neighbourhood, engaging in a campaign of harassmentagainst the residents of that community.They’re writing jaywalking tickets, filing charges for simple drug possession, and requiring that beat cops stop a minimum of four people per block for “street checks”, which apparently involves identification checks. If you think that’s acceptable, just imagine the same thing happening to you while walking down your own street.

Meanwhile, the special amalgamation of police that is being amassed for the olympics, the Integrated Security Unit, is busy establishing a reputation for being Canada’s ‘light’ version of Stasi. Police are showing up to question people for any kind of olympic criticism. For instance, 73-year old Peter Scott, who wrote a critical letter to the editor, had police come to his door. Or there’s Danika Surm, who had the ISU show up at her class at Langara College, just for being the friend of someone who is an olympics opponent. Just google “olympics 2010 harassment” and you’ll get lots more examples.

The police claim that they are simply trying to uncover any potential threats to the physical security of the olympics – preventing terrorism, in other words. However, I am sceptical. It sounds to me, and to many others, like the police are being used for political purposes. Having “law enforcement” agents visit people who express political opinions is nothing more than an intimidation tactic intended to stifle dissent. It is an unjust, immoral, and completely inapproriate use of state power against citizens that one would expect more from a totalitarian state than one would from good old Canada.

The provincial government has also proposed a law that would empower the Vancouver police to force homeless people into a shelters or other “safe alternatives” during cold or wet conditions. This being Vancouver, cold or wet conditions can be expected at pretty much any time of year, but most especially during the winter olympics.

I doubt that housing minister Rich Coleman has any genuine interest in the safety of the homeless. On the other hand, rounding them all up and stuffing them into makeshift jails will be a highly convenient way of hiding them from the sensitive eyes of olympic tourists. Unless this is just the first step in a more general re-institutionalisation process (following the de-institutionalisation process of the 80s on the alleged grounds of civil liberties) I’m fairly certain that once the five-ring circus has packed up and left town, the homeless will once again be allowed to (or even encouraged to) die quietly in dark corners.


Most of us are not homeless. Most of us have no desire to publicly oppose the olympics. Most of us will not get a ticket for speeding through a red light at Main and Hastings while the police are on the sidewalk reinforcing respect for the rule of law among those poor and weak enough to be bullied.

When the provincial government introduced photo radar, a mass of motorists rose up in protest to defend what they perceived to be an assault on their constitutional rights, such as the right to hurtle through a school zone in two tons of steel with impunity, and photo radar was abandoned.

The fact that a minority does not have sufficient numbers or sufficient resources to rise up against a perceived injustice is not an indication that the injustice is imaginary. We must look out for each other’s rights, even if we don’t always agree with or understand them.

Remember the words of Martin Niemöller:

When the winter olympics was first being proposed, I was opposed to it. I didn’t like the effect it would have on the city and I thought it was a massive use of taxpayers dollars being used as a subsidy to corporate interests, little of which would trickle back down to the source. As a return on investment, it seemed unappealling. However, once it became official, I resigned myself to it, and I can say, hoped it would succeed, at least enough so that we wouldn’t get stiffed for another few billion. And I would be cooperating with it today, if it were not for the unprecedented attack on civil liberties that is taking place as a result.

The olympics may be a very desirable event to many, but if we can’t hold an olympics, or any other event, without depriving citizens of their rights to free speech and free assembly, we have no business holding it at all.

Now, I know that in this age of information overload and overwork, it is difficult to pay attention to, let alone be involved in, all of our civic responsibilities. But citizenship and responsibility are work. We owe our forbears the responsibility of carrying out that work. I ask you, not to give all your time to saving the world, but to take just a few moments here and there to do something, anything. To do the right thing. To remember. To remember why.

One great way that you can take some meaningful action, with minimal work or expense, is to join the British Columbia Civil Liberties Association. The BCCLA does an admirable job of defending freedom of speech and the other liberties that we take for granted and advocating on behalf of those who are being deprived of those liberties. You may not – in fact, I guarantee that you will not – agree with all of the people and organisations that the BCCLA defends. You may not agree with any of them at all. But free speech isn’t always pretty or convenient. I might also add that the BCCLA will not spam you endlessly for more money or send you reams of junk mail (I wouldn’t be a member if they did), and you don’t actually have to participate in any of their activities, but you are also more than welcome to do so.

Please, join. It’s easy. It’s cheap. Do it now, not tomorrow. On November 11, be able to say “I remember. I’m doing my part to honour and preserve what they died for”.

If you don’t live in British Columbia, consider joining one of these complementary organisations: