On May 17, 2008 Carol Ann Berner was driving her car on 64th Street in Delta. She lost control, presumably upon hitting some speed humps, and after careening off of a parked car her Oldsmobile Intrigue crashed into a fence beside which two people were feeding a horse. The two were Daphne Johanson and her four year old niece, Alexa Middelaer. The four year old was killed.

According to various news sources, Berner initially told the police that she had not been drinking and that she had inexplicably lost control of her car. She also said that she had been travelling at a speed not in excess of 60 km/h. After being questioned again about drinking, she allegedly told the officer that she’d had two glasses of wine about three hours before the collision. The officer then conducted a breath sample, for which a blood alcohol reading in excess of .10 was determined. Another media source reported that, in a discussion with undercover officers, “Berner admitted to at least three glasses of wine before driving that afternoon“.

It was also reported that engineer Steve MacInnis testisfied to the court that, according to the sensing diagnostic module in her car, Berner had been driving as fast as 91km per hour immediately before the accident. The speed limit where the accident took place is 50 km/h.

You know the old disclaimer – nothing has been proven in court, so Berner is entitled to be assumed innocent until proved guilty. That’s a principle that I agree with. These things should not be tried in the media, for everyone should be entitled to a fair and impartial trial, lest we inadvertently convict the innocent.

It’s easy to despise Berner. She’s admitted to driving the car that killed the girl. She’s admitted she was drinking. She apparently lied about the speed at which she was travelling. Based on the information I’ve read, I can easily conclude that if Berner had any moral integrity she would plead guilty and spare Middelaer’s family a lot of extra agony (and taxpayers a lot of extra money), instead of throwing the dice onto the legal craps table in the hope of getting off on a technicality.

I’ve been vaguely tempted to attend the trial, just once, so that I can see what a creature like Berner looks like up close and in person – to look at her face, maybe look into her eye and try to get a glimpse into the empty soul that I imagine that someone like Berner possesses. It’s easy to imagine Berner as some sort of other, a monster who bears no resemblance to you or me.

I don’t need to do that, however, and not just because I loathe the idea of going to Surrey. I don’t need to go out there because I can find plenty of Carol Ann Berners anywhere I look. At the local school, sitting in her minivan waiting to pick up her kids. At the arena, sitting in the stands with his buddies watching the hockey game. At The Bay, buying birthday presents for her nieces. In the legislature, sitting in the corner office trying to think of a novel way of making the HST look better. Berner has friends, and children, and grandchildren. She likes a steak and a glass of wine. Sound like anyone you know? 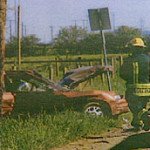 I would suggest that there is one major difference between Carol Ann Berner and the rest of us: Luck. How often have you been to a party and heard the host ask someone about to leave “Are you sure you’re OK to drive?” How often have you heard the target of that question say “You know, you’re right. Maybe I better leave my car here and take a cab”? Yes, it happens. But it doesn’t happen often enough. Just go stand outside any pub after work. The parking lot is jammed with cars that won’t be there at closing time. Most of the people are consuming some amount of alcohol, and most are driving. Most will be lucky and will not run anyone over on the way home.

Some of the defenders of a little light drinking and driving argue that in most cases, the law is too strict. It is perfectly safe to have a drink or two. Just look at the evidence: all those people are leaving pubs after a couple of drinks, and kids aren’t being killed every day. It’s a seductive argument to those who have a personal stake in believing it. But consider this report compiled by Applied Research and Evaluation Services (ARES) at the University of British Columbia:

Turning to 2006, the most recent year of data, it is estimated that, for Canada, impaired driving, including impairment by drugs other than alcohol, resulted in 1,278 fatalities, 75,374 injuries and, including property-damage-only, a total of 216,480 crashes, at a cost of between $2.2 and $12.8 billion dollars, depending upon the costing model used.

I would hazard a guess that when Carol Ann Berner got into her Oldsmobile Intrigue that day, she didn’t think much about whether or not she should be hurtling down the street in two tons of steel with alcohol in her blood. Now she’s telephoning undercover cops who she thinks are her new friends, telling them that she feels like killing herself.

What happened to Berner could happen to anyone who drinks and drives. Think about that before you turn the key.