For the most part, I had a tail wind, but it was from an angle, so it was partly a cross-wind too. The highway generally goes east, but once in a while it will dogleg to the north, to pass around old man Johnson’s farm, or something. During these north-bound jogs, I am hit with very strong cross-winds, and have been pushed into the soft shoulder several times. The worst part is when a large cattle truck passes at high speed in the opposite direction. The effect of the altered airflow is like having a screen door slammed in your face (though screen doors typically smell better). 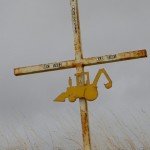 As previously mentioned, each time I pass a bit of wetland adjacent to the highway, I flush whatever waterfowl happens to be feeding there (and there are a lot of these small patches of wetland). Besides the Shovelers, there has been a lot of smaller ducks with what appears to be a white stripe on its face, and white patches under the wings. They take off so soon I can never see them well. I now believe these to be Blue-winged Teal.

Today I passed by the towns Kelfield, Ruthilda and Springwater, before arriving in Biggar. Their slogan is “New York is big, but this is Biggar”. It appears to be a nicer town than Kerrobert. It has a small campground just outside of town, in which I am the only occupant. I have managed to find a not-so windy spot behind a fence. And it certainly is windy. Each day, it seems to get stronger. Needless to say I am happy not to have it as a headwind.

I expect to arrive in Saskatoon tomorrow morning. There are no hostels there, so I am not sure where I will say, but at least I will finally find an internet connection. After seven days, there are no doubt a large number of Viaqra and Cialis solicitations to delete from my mailserver.