Mostly I’m just hanging about town, reading, and wandering around the various neighbourhoods, interspersed with sessions at the beach.

Tuesday, I had dinner with friends Darren and Brian at an English pub on Kingston Road, where I had a rather good steak pie. I met Darren in grade five in Winnipeg, and then lost contact within him for a few years before we met up again in grade ten. After that, Darren moved to Edmonton and I moved back to Vancouver soon after, and we lost contact once again. We reconnected again about two years ago, and we make a point of getting together everytime I visit Toronto. Brian, who is originally from the east coast, has also been an valuable resource for information on Quebec and the maritimes, and I will probably have a better trip thanks to his advice (if I ever get around to leaving Toronto, that is).

Wednesday, I stayed close to home for a good part of the day, reading, and also replacing the front pannier rack on my bike, a piece of which snapped on Manitoulin Island, but I ventured back to the beach in the late afternoon, where I stayed until 8:30, before heading back downtown for dinner. (I have to get the beach time in now, before Toronto’s outside workers go on strike, which will probably eliminate the harbour ferries). I’m finding it a bit of a challenge, despite the plethora of dining establishments, to find a decent meal in this town. I tend to search “Now”, the local weekly newspaper, for restaurant suggestions, but actually finding the places is sometimes a challenge, and then, other problems sometimes arise.

For instance, after the beach I looked for a place called, simply, “Soul Food”, out near High Park. It was supposed to be at 582 Lansdowne, but wen I rode out Lansdowne, there was no such address in gthe 500 block. After 45 minutes of investigation, I finally discovered that 582 comes after the 700 block. But the place was closed Tuesday and Wednesday. When I do find places that are open, service issues are frequently encountered. This is particularly a problem in the trendy-ish Queen West area, where customers are apparently expected to consider being ignored by the junior-Gen-X staff as a integral part of the experience.

Today (Thursday), I ventured out to an outdoor art show at Nathan Phillips Square (City Hall), only to find that it doesn’t start until the weekend. So, I settled in to another Timothy’s and contented myself with a couple of George Orwell’s essays and a good cup of tea. In the evening, I met up with ex-Vancoverite Joe Wilson, whence we dined on burgers and reviewed the current status of our lives and those of our mutual acquaintances.

Though I had been planning to leave Toronto today, I am going to hang around for the weekend, as Ben and Carol are off to the cottage again, and I will look after the cats. I don’t mind at all, as it means a couple more days of beach relaxing. Besides, I’ll need the whole weekend to figure out how to re-pack. 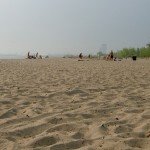