I arrived in New York as scheduled on Tuesday shortly before midnight.

I am staying at a hostel that has 624 beds, but fortunately, they aren’t all in one room. It’s one of the few places in New York that has rates that I am willing to pay, as even dumpy hotels rent for $150. The hostel is in Manhattan’s upper west side, near Central Park and Columbia University, so it is quite a handy location for playing tourist.

On Wednesday, after mastering the subway map and developing a rudimentary sense of direction, I wandered around Greenwich Village and along the Hudson River, and then in the evening satisfied one objective by dining at the first Indian restaurant I’ve seen in five months.

On Thursday, after sleeping unusually late, I wandered rather aimlessly once again, from Times Square to the United Nations via 42nd Steet, with little detours here and there to browse bookstores and search in futility for a potable pot of tea. In the afternoon, I met up with a hostel tour group to the Empire State Building. En route, they dragged me through such important cultural landmarks as the Trump Tower and toystore FAO Schwartz (the latter selling the most phallicly suggestive water cannon I have ever seen marketed to children), as well as quick passes through or by the Metropolitan Opera House, Tiffany’s (too late for beakfast), and a bunch of other buildings famous only for the brand named crap that they sell more ostentatiously than elsewhere.

Late in the day, we finally made it to the ESB, along with what appeared to be 1,367,479 other tourists. Things aren’t simple these days, and a visit to the top obsevation deck required a ride up one escalator, a queue to get through security, an examination by security that seemed more thorough than those required to board an aircraft, payment of $16, another queue for an elevator, a ride up to the 80th floor, where they photographed each visitor and then herded us through a maze until we reached another queue in order to board an elevator up to the 86th floor. Once on 86, we were deposited, naturally, in a gift shop, where most people seemed to be dutifully snapping up knicknacks.

The obsevation deck itself was as crowded as I imagine FAO Schwartz would be on Christmas eve. It is surrounded in Guantanamo-like sharpened aluminum bars that I imagine are to prevent democrats (as opposed to Democrats) from leaping to their deaths in despair for their rapidly deteriorating republic. Someone recently complained because I only post pictures of bugs, and not people, so here is a crowd to make up for the lack: 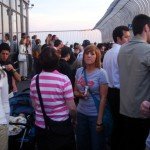 Here also is a shot of some old grizzled grump that managed to eke out a vague smile despite the atmosphere (the Chrysler building is illuminated, to the right): 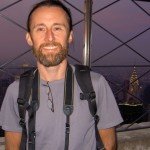 I won’t bore you with the process for leaving the building, which was no less tortuous.

After that, I dined at an Irish pub near Times Square with one of my tour mates, where I paid $32 for a Shepherd’s Pie and a pint o’ Guinness.

On Friday, I spent a good part of the day sitting in Central Park reading, and then went to a Shakespeare in the Park performance of Romeo and Juliet in the evening (a bloodbath, as usual). Not only were the tickets free, but the seats are assigned in advance (hint to Bard on the Beach).

Today I am off to Brooklyn, which allegedly has vaguely Berkeley-esque qualities.

My overall plans are changing once again. As someone asked me to house-sit in Kitsilano for a month, I am taking the train to Toronto on Monday, where I will spend a week visiting Ben and Carol and take care of some business, and will fly to Vancouver on June 19. The house-sitting gig fell through after I made the arrangements, but as Eric is travelling at the same time, I will house-sit for him instead. Late in July, I will fly back to New York to resume my travels.