I’m not shy about expressing my disdain for television. I canceled my cable in 1989 and have never regretted it. Not only have I saved a lot of money, I have forced myself to find other, more engaging things to occupy myself. I spend much of my uncommitted time – time that might otherwise have been wasted staring at the flickering blue tube as my arteries atrophy – reading, taking courses, copulating with abandon (and one or two others), writing, getting exercise, and attending intellectually stimulating cultural events. I feel good about this choice. I feel much more engaged in life than I did when I spent (and spent is a good word for it) my discretionary hours being a passive slave to the television.

This is not a popular position. It seems that frequently when I attend a social event, someone will ask “Did you see Glee last night?”, to which I will inevitably respond with something like “No, but by christ, I sure felt it”. Somewhere in the conversation it will be revealed that I don’t watch television. The typical conversant will then congratulate me on my wise choice and tell me how they don’t watch much of it themselves, just the Knowledge Network and a few other educational programs.

Five minutes later, having escaped my dull companionship, they will be engaged in an animated discussion of last season’s Survivor episodes with someone else at the party. Very rarely have I visited someone in their home and found the television tuned to an educational program. More likely, they’re tuned into the Iron Chef.

Perhaps I simply have a great misunderstanding of what people mean when they say “educational”. I suspect that there are quite a few that think that anything that is loosely considered a period piece is of educational value for its historical information. Chances are, however, that if it’s aired during prime time on a mainstream station, the educational value is dubious.

For instance, my housemate recently rented a couple of discs containing episodes from a television show called The Tudors. While normally I would say “Enjoy yourself, I’ll be in the other room reading”, on this occasion I decided to live dangerously and give them a watch. As I predicted, The Tudors is largely rubbish.

Let’s start with the casting. Now, there was no photography in the 14th century, of course, so portraiture of the period must be relied upon. Imagine that you’re the king of England and you commission an artist to paint your portrait. Chances are that the artist, if he doesn’t wish to be drawn and quartered, is going to lean toward depicting you in the most flattering possible way while maintaining a reasonable amount of reality. Think about the profile pictures on a web dating site. Do you think any of them don’t post the most appealing of their available photos (however unflattering)?

With that in mind, here an image that is a pretty typical depiction of Henry VIII: 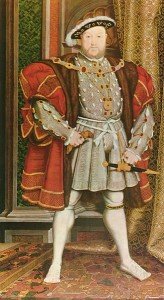 The artist has depicted a relatively beefy fellow, bearded, and with enough forehead visible beneath his hat to suggest that perhaps some degree of balding is the case. His skin does not look at all wrinkly, suggesting some degree of youth.

Now look at this promotional poster for The Tudors, bearing an image of the actor who portrays Henry:

I find it rather unlikely that any evidence exists that Henry VIII bore any resemblance to a 21st century designer-underwear model. Yes, Henry became king when he was just 18 years old, but the events described in The Tudors occur much later, when Henry is somewhere around 30, and older, a time at which he was probably already well on his way to beefy.

The dialogue in the show may be vaguely entertaining to someone talking on the phone, reading e-mail and distractedly clipping his toenails while viewing the show, but if one actually contemplates the words being spoken, it’s all a lot of fluffy nothing, a recitation of simplistic phrases that try to sound appropriate for the period but that actually communicate little of substance. To make matters worse, characters frequently use phrases that sound distinctly modern, despite their attempts to speak them in a sort of Shakespearian style.

While I’m no scholar of English royal history, the program is clearly loaded with intentional historical inaccuracies, intentional in the interests of being more entertaining and appealing to the audience most desirable to advertisers: the young, presumably. How else to account for the non-stop sex? This band of pious catholics does more humping than 1st century Roman nobility. There is probably some accuracy to the promiscuity, but really – did they never do anything but dance, drink and screw without any pretense of Catholic artifice?

The key component, the primary tool for entertainment in The Tudors, is tits and ass. There are more female nipple shots in the first episode than can be found on the average adult website. And it’s a wonder the actor playing Henry isn’t off on long-term disability for repetitive strain injury for all the times he’s been photographed pulling his shirt over his head, not to mention playing canopy-bed Twister with nubile young (and possibly airbrushed) actresses with ample, highly visible bosoms.

No, I don’t think I’ll be enjoying more of this rot. There are countless better ways to occupy my brain cells, and I think I’ll keep seeking them out.