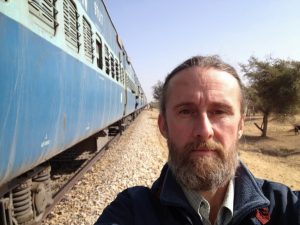 The train from Bikaner to Jaisalmer is only three hours and five minutes, but it seems a lot longer when you’re on an unreserved and unheated train with windows that won’t close tightly and it’s near freezing outside.

There were only three other people in my coach: a young guy from Belgium, and a middle-aged Indian couple. We all took turns pacing the narrow aisle to stimulate blood flow, and the rest of the time huddled on our seats, clad in every piece of clothing we could pull from our luggage.

The fog finally lifted an hour out of Jaisalmer, and the Belgian and I staked out space hanging out of the train’s two open doorways where we could catch warming rays. We were very happy when the train was stopped for a half hour next to an orchard in which a goatherd was grazing his flock, where we were able to get down and sit in the sun. By the time the train started moving again, I’d returned to a healthy body temperature. 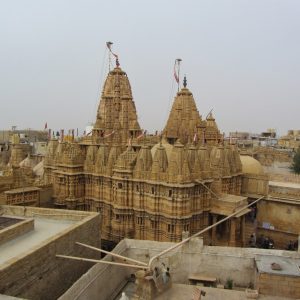 Jaisalmer is still relevant and accessible – despite its isolation – partly because of its impressive living fort, but also because of its proximity to Pakistan, with whom India still has a hostile relationship. The frontier is less than 100km away, so there is a strong military presence around, if not within, Jaisalmer, and occasionally fighter jets can be heard taking off from a nearby, but not visible, airport.

Jaisalmer has the only fort (that I visited) that still has a living town within its walls. It’s a hive of small shops, Jain temples, cows, goats, and tourist hotels, with winding cobblestone roads too narrow for cars (but not, alas, for honking motorcycles).

I opted to stay outside the fort, partly for environmental reasons (water is a problem in the fort, exacerbated by tourism) but also for the view: I chose a hotel right outside the fort walls, in a room that looked directly up at the fort.

For eleven and three quarter months of the year, Jaisalmer’s too hot rather than too cold – poor timing on my part. It was too cold to sit still for long, so rather than huddle in bed all day I spent a lot of time hiking around the lower streets and markets that surround the fort. It’s a good time for local merchants to unload their stock of pashmina scarves, though. Since all the restaurants are open-air rooftop joints, I got in the habit of drinking (and clutching firmly) hot ginger-lemon-honey tea. 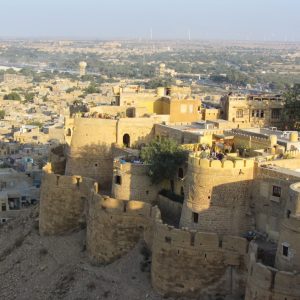 Kuku’s sits up on the rim of the fort’s high (as much as 25 storeys above the desert floor) walls with a view looking down upon my hotel. I had breakfast at Kuku’s each morning, and returned each afternoon for tea and a snack. Thus, I got to know the proprietor reasonably well. It’s a solo operation – Kuku does everything, and he manages a pretty diverse menu despite the limitations.

The fort was founded in 1156 and is the only continuously occupied fort in the world. Rights of possession within it seem to be passed along family lines. The space that Kuku occupies has been in his family at least as far back as his great-grandfather.

In northern Indian cities, you can usually look in any direction and see small squares twisting about in the sky. Indian boys, apparently, are mad for kite flying. I noticed this but didn’t really pay it much attention in other cities, but in Jaisalmer I had lots of time – and a bird’s eye view – to make a casual study of the hobby. 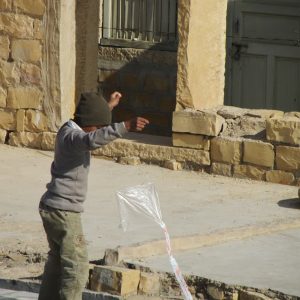 Having read a graphic version of Khaled Hosseini’s “The Kite Runner” last year, I probably should have understood that kite flying isn’t so much a friendly hobby as a sort of childish blood sport. The boys cover their kite strings with glue and ground glass, and then compete to see how many competitors’ kite strings they can cut while flying.

I had a very good vantage point, as there was a boy on the next bastion from Kuku’s everyday that I was there. The kites are not elaborate, just a one foot square of plastic attached to minimal sticks. When I first started watching, the boy managed to cut the strings of five other boys in fifteen minutes. When a cut is successfully made, and the loser’s kite begins to plummet to earth, the victor yells “Boykut” or “Boykut Ho!” (questionable Anglicisation). According to Kuku, this doesn’t translate easily, but means something like “I pull your leg”.

It all seems a bit darker to me than mere leg-pulling fun, though. Perhaps it’s the anonymity. As far as I can tell, the opponents often can’t even see each other, hence they don’t know whose string they’re cutting, making it seem less like sport than if they’d met to compete. 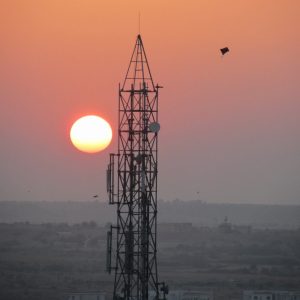 The sensation of darkness was not mitigated when I went to Google to learn more about this sport. The first search result I found about the subject was a news article about a 12-year-old boy who’d been burned alive by two men after cutting another boy’s kite string. (“Scroll down for video.” Uh, no thanks, Daily Mail).

You may have noticed that all the references above were to boys. It seems almost universally a male activity. It wasn’t until my last day in Jaisalmer that I finally spotted two very young girls on a rooftop trying, unsuccessfully, to get a kite in the air. Considering the apparent underlying violence of kite flying, I wasn’t sure whether to be cheered by their attempts, but if they really want to do it, I hope no one tries to stop them.

A birthday in the desert

I was quite happy to spend xMas somewhere that is hot and almost entire devoid of evidence of pseudo-xtian bollocks and the consumerist frenzy that it is used to justify. The only noticeable nods to xMas were the occasional tree in a tourist hotel, and some some silver garland that hung over two back alleys, though the latter may have been left overs from Diwali. Kuku erected a small silver tree on the bastion wall on December 24. 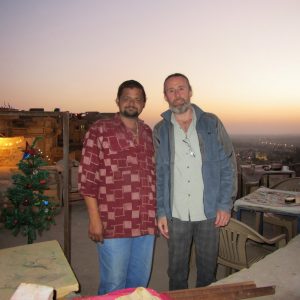 December 25 was my fiftieth birthday, and while I didn’t intend to do anything of note for the occasion, we discovered in conversation that Kuku’s birthday is also December 25 (though he’s two decades younger). Thus, after a breakfast of porridge with bananas and honey and a cup of tea, I set out to find Kuku a piece of birthday cake.

Along the way, I passed two young girls playing badminton. I’d passed them each day, doing the same thing, since I’d arrived, and each day one of the girls had begged me to play badminton with her, which I repeatedly declined. This time, I set down my pack, rolled up my sleeves, and played.

My first few attempts were laughable (really – the girls were laughing at me derisively), and my opponent was thoroughly disgusted when I hit the shuttlecock into a nearby open sewer, twice, from which she had to extricate it and shake off the drippings. However, I soon got the hang of it, and though we didn’t keep score, I held my own.

Later that day, I went back to Kuku’s for the sunset and presented him with the piece of chocolate cake that I had obtained from a faux-German bakery outside the fort. Kuku, however, produced a whole cream cake that he had bought. There on the fort wall, we ate cake (with Kuku’s nephew providing very enthusiastic assistance) and said goodnight to the Jaisalmer sunset (and to each other) for the last time.

As this was my final day in Jaisalmer – I had an onward ticket on an overnight train at 11pm – I returned to the Star Haveli hotel where I’d already checked out of my room (but stored my bag) and retired to the rooftop to have a snack and read until my departure time.

As I sipped my ginger-lemon-honey tea, the owners and staff came out with another cream cake and a big candle, and we all ate more cake. Afterward, one of them drove me and my backpack to the train station on the back of his motorcycle, and I departed for Jodhpur. 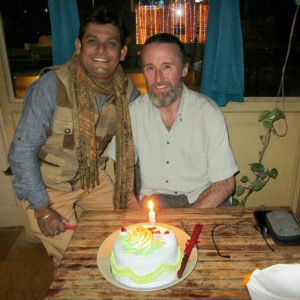