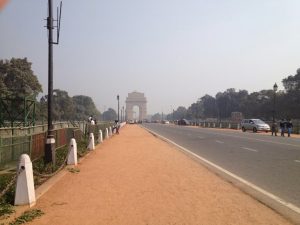 I want to write about how successfully I am navigating India, and in many respects I can: alone, I’ve wandered about, day and night, in Delhi, Agra, Jaipur, Bikaner, Mehansar, and Jaisalmer. I’ve ridden the crowded Delhi metro, frozen in the back of a tuk-tuk with a loose front wheel, and got a ride to a train station on the back of a motorcycle with a full backpack, no helmet, and a cramp in my right thigh. I’ve ridden trains in carriage classes ranging from Executive Chair Car to Unreserved Sardine Can. I’ve adapted to being greeted almost constantly – in benign-sounding social ways that always turn out to be some form of attempt to relieve me of money – with uncharacteristic diplomacy and patience.

Nevertheless, I must confess that the aural stimulation and the constant fending-off of touts wore me quite thin for a time, to the point that after only a week I wasn’t sure that I’d last the two and a half months that I plan to be here. It didn’t help that I also early on had a slight cold (and/or allergy triggered by the the dust and pollution of Jaipur), nor that the weather turned relatively frigid once I moved west of Shekhawati. I’d known it would be cool, but I hadn’t realised that it’s possible to have sun-blocking fog in the middle of a desert.) 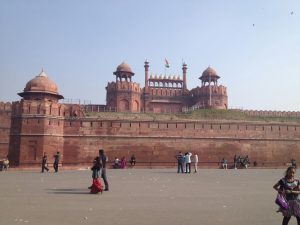 I’m pretty certain that I will, indeed, adapt and find a way to be immersed without drowning, thanks to the most useful piece of advice for this sort of travel I’ve ever received, indirectly, and that has lodged in my mind with seeming permanence. It was provided by my very well-travelled Auntie Stella, who wrote in an e-mail during a moment of crisis while in Sri Lanka three years ago, “It’s these kinds of experiences which make travel exciting! And make you dig deep and find your mettle.”

I took the time to slow down a bit (physically and emotionally), and adopted the attitude to adaptation provided by the examples of – perhaps – yoga and Buddhism: rather than struggle against the troublesome feelings, I chose to relax and breathe into them, to step back internally and observe from a slightly detached position. It seems to be working out very well. I feel much more confident, I’m making better connections, and I’m developing a knack for cheerfully aknowledging greeters (ahem!) without getting sucked in (too often) to marketing ploys. Of course, it doesn’t hurt that the weather also took a turn for the far-nicer-and-warmer.

I was barely off the plane in Delhi before I first asked myself the inevitable and anticipated question, “Why am I here?”

My “Why?” isn’t, as some have asked, a version of “Why on earth would you want to go there?” (to which I would respond, “Why wouldn’t I?”); it’s more a philosophical container for a number of other questions, the nature of which will be revealed through the course of the action of being in India.

I happen to like this question – in the absence of an overarching acceptable system of external guidance – religion, say, or cultural obedience, or social tradition, this question is always useful, whatever the situation. “Why am I doing this job?” “Why am I in this disco having my eardums shattered?” “Why am I in bed with this person?” “Why am I at this dinner party?” 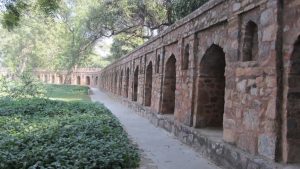 Sometimes, an answer supports the activity. Other times, the lack of (a convincing) one is a valuable indicator to move on and seek a more life-affirming activity.

I’m not particularly inclined to mysticism. I’m pretty sure I’m not in India to “find myself”, or to pay an old guy with a beard to put me on the fast-track to effort-free enlightenment. And I certainly didn’t come so that I could look at a lot of poor people and then go home and feel better about all of the unearned privilege that I enjoy just by being a white guy and that allows me the luxury of being here in the first place.

I’m here to see. To learn. To unlearn. To put in context. To understand new things about the world and myself.

I want to make clear that my expectation is not a new-age version of colonial exploitation, although arguably that is to some extent an inevitable by-product of using my wealth to insert myself relatively briefly into other cultures. What price does the exercise of my privilege exact? On cultures? On climates? I know I will continue to think about these things as I travel.

It was suggested to me by others that there would be no point in lingering in Agra (the allegedly charm-deprived city of 1.7 million, about 200km south of Delhi) for more than one night, so I arrived on the train at 10am, checked into a room, and then set out on foot for the Agra Fort. After seeing that, I hired a persistent bicycle rickshaw driver named Ratan to take me to the Kinari Bazaar (where I spent no more than ten minutes) and then back to my hotel. I was happy to walk, but he was sort of a cute old geezer and he offered to do the trip for the equivalent of about $1.70, so I thought I’d leave a little extra cash in the community. 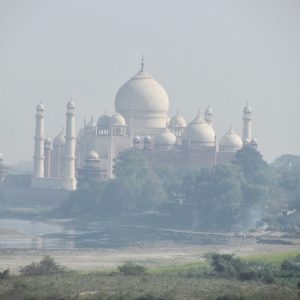 On the way back to the hotel, the road makes a bit of an ascent. It’s not steep, but it’s long enough to get a cyclist breathing a little harder, especially one hauling a trailer-laden tourist, even a skinny one like me. Halfway up, poor Ratan started making some rather consumption-like hacking noises, and I noticed that ambling pedestrians were passing us.

I had him pull over next to a donkey that was also responding poorly to the incline. “Get in the back,” I said. Then I pedaled the rest of the way up the hill while he caught his breath. He seemed to enjoy sitting back there with his feet up while his fellow rickshaw drivers pointed and laughed.

I stayed at a nicely-located guest house run by a family. The eldest son took care of most of the business, with assistance from his brother. Their mother provided breakfast and supervised an employed fourteen-year-old girl and an older woman who looked after cleaning.

The senior son was quite candid, and out of the blue told me about his pending divorce, which he said is very unusual in India. Like most marriages, his had been mostly arranged by his mother, who had viewed the listings of potential wives, conducted interviews, and then presented her son with five recommendations from which to choose. He met his bride only once before the wedding. 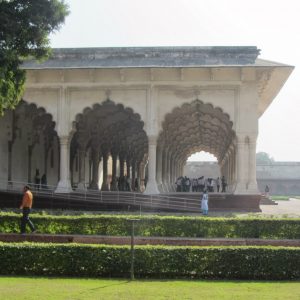 The son later discovered, upon trying to arrange visas for a foreign trip, that his wife had not been honest about her academic qualifications. Rather than a business diploma, she had not finished the equivalent of high school. On the grounds that a marriage established on the basis of dishonesty could not be successful, he is petitioning the state for divorce, despite the opposition of the woman’s family. In the meantime, his mother is once again interviewing potential wives.

From a western point of view, on the surface it is difficult to comprehend the concept of arranged marriages (personally, I find it hard to comprehend the appeal of marriage at all), but except for some obviously inherent societal gender role issues – that are hardly unique to Indian culture – I’m not sure that arrangement is inferior to the western model, just different. That young people have the assistance of their familes in establishing a primary relationship (some cultures may exclude their children from the process altogether, and it is not those of which I speak) has some appeal, at least in theory.

Of course, among the other problems with this model is the built-in suppression of non-standard ways of life that dissent from the mainstream. The most obvious example is homosexuality, though again, this is certainly not unique to arranged-marriage cultures. 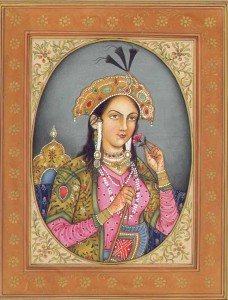 The first thing I ever knew about the place that is India was the existence of an immaculate building that, in my community of origin, was most often mentioned in terms of negative comparison. “Well, it ain’t the Taj Mahal!” someone might say about a motel, or a neighbour’s new carport.

As a child I wasn’t exposed to written references, only oral, and I never saw any pictures, so in my imagination it was “The Tajma Hall”, a possibly ruby-studded and more upscale version of the Ruskin Hall, where far-eastern versions of wedding receptions, Brownie meetings, and Saturday night bingo took place.

Somehow I managed to reach beyond the age of forty before I came to understand that not only was the Taj a mausoleum, but that it was built by Mughal emperor Shah Jahan (also known as A’la Azad Abul Muzaffar Shahab ud-Din Mohammad Khurram), as a monument to his most beloved third wife, Mumtaz Mahal (who died giving birth to their 14th child!).

I was up and out of the house before sunrise, intent on arriving at the Taj Mahal as soon as it opened at 7am, for two reasons. The first is that it’s said that the white marble best captures the light at sunrise. The second is that most of the other tourists won’t bother to show up that early. I had plenty of time and decided to walk the one-ish kilometre to the Taj.

A block from my guest house, I encountered two young American women in the dark who said they’d been walking in circles and asked me if I could tell them the way to the Taj. They were Patrice, from Washington, DC, and Alecia, from Cody, Wyoming, who had met each other in Delhi while teaching English as volunteers at an elementary school. “Follow me,” I said, though we ended up taking a tuk-tuk as it was the only way to shut up the driver who wouldn’t take no for an answer, and who had lowered his price so much that it seemed silly to say no. 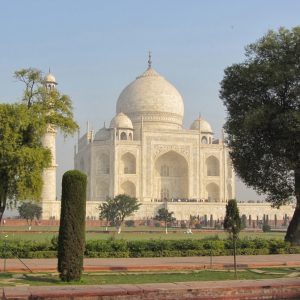 At the Taj ticket counter there were only a few people in four sex-segregated lines: two lines for Indians, two lines for foreigners. The separation is because visitors are frisked on the way in, and women are frisked behind a privacy screen. That’s where I said goodbye to Patrice and Alecia.

I haven’t a whole lot more to say about the Taj Mahal other than to say that it’s vastly more impressive when you’re standing in front of it than in any picture I’ve seen has ever conveyed. The way the light illuminates the marble in changing tones as the sun moves into the sky is amazing. It’s all about the that, really, and the scale. The inside is interesting, but I spent only about three minutes looking at the actual tombs while I spent a several hours looking at the outside from various distances and vantage points. On the way out, I resisted the aggressive appeals of a boy selling, curiously, Taj Mahal Snowglobes, though he lowered his price from 1000 rupees to one rupee.

Upon my return the to guesthouse, I was surprised to find Patrice and Alecia sitting at the kitchen table eating breakfast. We’d been sleeping in the same house and hadn’t known it. 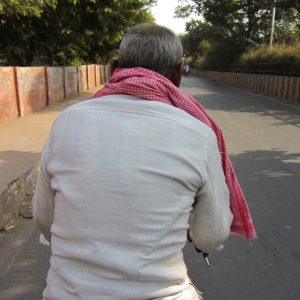