Exactly ten years ago, I marked my 40th birthday with a visit to London, where from my modest room in Bloomsbury I explored every museum, art gallery, and bookstore on the map. “The map” featured prominently. Two maps, in fact: one mini London A-to-Z, and one fold-up paper map of central London. Since I’m not a natural at determining direction, there were many times (most every time, as I recall) that I came up out of Russell Square tube station and, in an effort to not rely on my maps and therefore to look less like a tourist, walked pretty much a four block square before I figured out the way back to my room. 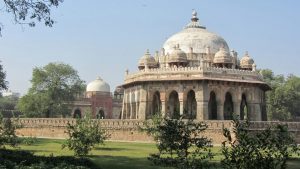 Things have changed since then. On arrival in Delhi, I simply visited (“simply visited”, you can be certain, wasn’t simple at all, but there’s no need to go on about it at length) the local AirTel store and obtained a SIM card and a data plan for my iPhone. Now, I’m as quick as anyone to bemoan smartphone culture, but on the subject of navigation I must concede to the superiority of my device over the paper map. I simply plug my destination into the map app, Google and GPS guide me along nicely, and that narrow twisty rabbit warren in which I have lost myself just before sunset is no longer a concern. Unless the battery runs down or I step into an open sewer while checking the screen. 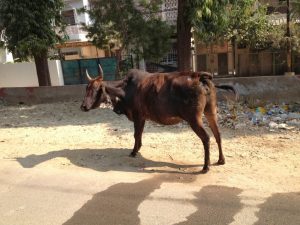 The holiness, and thus free-ranging nature, of cows in India is anecdotal common knowledge. When I got to Delhi I wasn’t therefore surprised to see cows on the streets. In the parts of Delhi I visited, though, most cows seem to be secured in some way, either tied to something, or pulling a cart. Apparently holiness discourages the eating of, but doesn’t doesn’t preclude the enslavement of, these gentle beasts (or of hitting them with sticks should they try to treat your vegetable stall as a salad bar).

Once I left Delhi for smaller centres, though, I found plenty of cows wandering wherever they pleased, with only occasionally observed exceptions. It might seem a bit daft, but somehow it never occurred to me that where there are cows, there be bulls too (I suppose the calves have to come from somewhere…), and I was a bit tense the first couple of times I had to squeeze past an enormous horned bull in a tight alley (I suppose there’s a joke in there somewhere…).

Aside from cattle, there are also many goats, some sheep, wild boars, and occasionally what appear to be water buffaloes, along with many dogs and a few cats. Oh, and camels, in the west, two of which were standing outside my front door in Jaisalmer when I went out in search of breakfast one morning. Except for the dogs, which seem to form into small packs after dark and get into fights with one another, all of this livestock in the middle of a crush of humanity and vehicles seems quite natural. You’d think there would be a lot of scat around, and there is some, but not as much as would be expected. As far as I can see, the poor collect the cowpies for fuel, and whatever is left is often eaten by the boars. 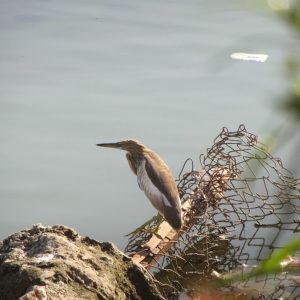 As hoped, I have secured a copy of Oxford’s Birds of the Indian Subcontinent. Although I resent having to carry its rather significant weight, I wouldn’t do without it, and have so far spotted the following avian life:

Before I left Vancouver, I decided that it might be nice to read some Indian literature as I travel, so I picked up a few titles from MacLeod’s. Then, when it came time to hang the backpack on my shoulders, I decided I didn’t want to carry them (clearly, I’m a candidate for an e-reader, even as I resist), and decided that I would take only one and, when it was done, give it away and buy or otherwise obtain another. After much consideration I put Rabindranath Tagore’s novel The Home and the World in my pack. It has the added benefit of being relatively thin and printed on lightweight Penguin stock.

I’m about half through the novel, and it occurs to me now that reading Tagore to put India in perspective might be a bit like preparing for a trip to England by reading Jane Austen. Nevertheless, since the book is set in pre-independence India and the main character is a thinly disguised Tagore, it is interesting historically, culturally, and philosophically, and seemingly relevant still, as one can imagine what Tagore might have to say about the flavour of Hindu nationalism apparently being energised by the BHP today.