As I am staying another night, I wanted a little more food. The small store here in the park is only open weekends, so I had to ride into town. Tuxford, the nearest town, is about 15km away. I rode in with the wind at my back, only to find that Tuxford has no stores at all. Back through the wind I rode.

I went for a long walk up the lake, looking for the Buffalo (which are apparently kept somewhere nearby) as well as historical information – apparently this park is named after a place into which the Indians used to chase the buffalo, trapping them for slaughter. But I found nothing, other than a bunch of mosquitoes and a wood tick that tried to attach itself to my leg. 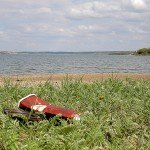 There are still no other campers here, but there are some people that come during the day with their boats, mainly to fish. However, there is a crew out there today water-skiing, with something that I’m sure they refer to as “music” blasting periodically over the water.

The squirrels here are a little annoying. They must be used to people feeding them, as there are several varieties that are forever running around my site. One kind, that makes a noise that sounds like a bad cell-phone ring, appeared under my picnic table suddenly this morning, as I was sitting at it reading Saturday’s Globe and Mail. He let loose his ear-splitting ring, startling me into smashing my knee against the top of the table and spilling my tea. I jumped up and threw a rock at him, but he only chased it to see if it was something edible. They need more birds of prey around here.