The concept sounds encouraging: find some USAmericans with negative views of Muslims willing to accept a free trip to Egypt, film the action, and then produce a culture-shifting documentary. As someone who knits his hands (or at least his brows) in despair at the polarisation and lack of rationality in much of the public discourse taking place in this era of Twitter, I had cautious hope for the film when I set out last night for Calgary’s indie Globe Cinema to see it. Like most things for me, it seems, the outcome is complicated.

Free Trip to Egypt is a project dreamed up by Egyptian-Canadian Tarek Mounib, born in Canada but now living and working in Switzerland. Mounib, a successful software entrepreneur who created a company called Kindness Films, hired staff and crew, and flew the whole lot to Egypt, apparently funded the whole project himself [1]https://ottawacitizen.com/entertainment/movies/ottawa-filmmaker-brings-free-trip-to-egypt-home.

The film starts off with Mounib and a companion, both with red MAGA hats on their heads, at a *rump rally. They approach a number of people, almost all of whom unequivocally reject the overtures of free travel in ways that pretty much reinforce what motivates Mounib in the first place.

Mounib doesn’t dwell here. Instead of turning this into a spectacle of redneck-shaming for the entertainment of (ostensibly) enlightened liberals, he quickly moves on. This was a good choice, for it impresses on the viewer early on that this is not a mere gimmick – he actually seems serious about this project as a way for one person to change the world for the better in some small way. 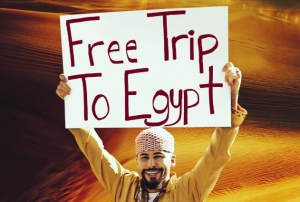 He tries attracting people on the street with a sign that says “Free Trip to Egypt”, but that doesn’t work well either, as most of them flee from possible eye contact (no surprise there – I do the same when I see someone on the sidewalk with a Greenpeace clipboard). Though we’re left to imagine the specifics, Mounib is ultimately more successful at other means of attracting potential qualified travelling companions. The most effective seemed to be a guest appearance on a radio program on which he was able to broadcast his mission to many ears. A little push-and-pull behind the scenes, and before we know it Mounib has lined up six people willing to travel to Cairo for ten days.

In the second part of the film everyone jets off to Egypt, we get to know the six participants a bit, and then they are matched up with Cairo locals with whom they spend time sharing perspectives and touring the city. Some of this is entertaining, and some is excruciating. For me, the ignorantly fervid Christians taxed my patience (to the point that I imagined momentarily the beheadings that they’d feared), but perhaps that says more about me than the film. Or perhaps it’s a sign of the film’s success if I’m led to self-examine my own judgemental feelings about the other (I still think that this type of born-agains are bonkers, though, and by the end of the film they’re the USAmericans I’ll be left most sceptical about having really been changed by the experience).

The final section of the film is back home in the United States, where Mounib visits all the participants separately, everyone gushes about how the experiences changed their views, and we get a glimpse at some members of their families, briefly.

One way the film opened my eyes a bit was that Mounib assembled a more diverse group than might be expected by an armchair observer of current affairs. Had you casually asked me yesterday to quickly describe the kind of person that might be the subject of this film, I’d likely have sketched a caricature of someone with the words “white” and “christian” being first up. And I’d be right about most of the group.

However, among those Mounib chose were Marc Spalding, an African-American police officer and single father, and Ellen Decker, a retired school teacher who identified as a 60s liberal and a Jew, but said that 9-11 had changed her (“I’m so racist now, I can’t stand myself.”). If the fact that many people who’d voted for Obama later supported *rump wasn’t enough, this is an additional reminder to re-think those boxes in which I can habitually put people.

At the end of Free Trip to Egypt, I kind of wished that Mounib could had given the Egyptian partners more focus so that we could have gotten to know them more, rather than make the westerners central, (even if it meant halving the number of USAmericans). But I came to accept that he probably made the right film for the right audience.

I wanted to like Free Trip to Egypt more than I actually did. Admittedly, documentaries aren’t my favourite film genre (I find many of them tiresomely formulaic, though very well-done ones can be very satisfying). Unfortunately, watching this documentary often felt more like watching a reality television program, a genre I’m far less charitable toward than even mediocre documentaries.

But most people seem to be much more tolerant of this format than I, so don’t take my discontent as an outright rejection. Just the fact that Mounib made the film, that he cares enough about the greater whole to go to the expense and effort, is encouraging. I hope a lot of people watch it.