After the last post about my first album, I’d better try to up my music reputation a bit, though that’s probably a futile goal (you’d understand if you were to view the contents of my iPod).

Today’s album entered my collection, I think, sometime in 1980, and came to me courtesy of an AM radio station in Winnipeg with the call letters CFRW (allegedly an abbreviation of “Coming FRom Winnipeg”). As a youth, I had a knack for winning things on radio call-in contests. This might not sound like an impressive skill to a contemporary teenager, but for most of my childhood we had only one rotary telephone on an analogue line. (For four people! How did we ever survive?) Anyway, whenever I heard a DJ say “Caller 64 right now wins so-and-so!” I was off to the phone like a shot, and mad dialling would ensue.

You didn’t have to dial an area code in those days, unless you wanted to call Outer Mongolia or something, but that still left seven digits to spin on the plastic dial as quickly as possible. Fortunately, I’d picked as a favourite radio station one that had no nines or zeroes in its number, but it was still a labour-intensive effort compared to today (“Siri, please call the bank“). I got pretty good at spinning off those digits, to the point that after I’d spun the seventh digit, I had to wait for the automatic switch at the central office to catch up. (If you have no idea what I’m talking about, kid, this might help). There was no re-dial option, either, so if I reached a busy signal I had to quickly push the cradle buttons down for two seconds, release, wait for a dial tone, and then spin the seven digits over again. This often went on for the length of an entire song. This is what we did in the 70s to improve hand-eye coordination before complex video games like Pong were invented.

Those relatively rare occasions when I didn’t reach a busy signal were heart-stopping (you’d think I was on the line for a million bucks, not a copy of Power in the Music by the “The Guess Who”.) Sometimes, after six rings, some poor old lady who probably had to wrestle her way out of a rocking chair and shuffle to the phone with her walker would answer and croak “Hello?“, at which point I’d quickly slam those cradle buttons down in anticipation of the next redial. Other times, the DJ would answer and I’d hear a breathless “You’re caller eleven, try ag- <click>“, and I’d try again. 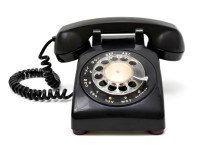 Most rare were those times when the DJ’s voice came on, all casual and calm and deep the way DJs talk, and say something like “Hi there, who have I got online?“, and I’d know right away that I was the winner and I’d try to sound surprised and happy (but not too surprised and happy because, you know, I’m a teenaged boy). He’d ask my name and what school I go to, and then tell me the radio station’s address so I could pick up my prize, though I knew the building better than my school. Then I’d hang up and wait to hear him say my name on the radio next to the word “winner”. Sure, maybe it’s a lame way to get validation, but it was better than nothing.

Sometimes I won records, other times movie tickets, sometimes just a poster. On this particular occasion though, I won a record and two tickets to a concert. The band was the quaintly-named Teenage Head, a sort of punk-New Wave group from Hamilton, Ontario. The album was the newly released “Frantic City”. It didn’t matter that I hadn’t even heard of them (or punk, for that matter) – I’d never been to a concert in my life at that point, so this was exciting.

The concert was at some now long-forgotten small venue in downtown Winnipeg, a theatre I think. I took my friend Darren, whom I’d known since grade five, to the concert with me. We sat in the middle of a highly inanimate audience of adolescent boys. I really remember very little about this experience – the music, what happened on the stage, what we did after the show. Only one minor detail sticks in my mind: at some point, the kid next to me wordlessly stuck a twisted-up cigarette in my face. I’d never seen a joint in my life, so I had no idea what it was and said “No thanks”. Darren gave me a look like I’d just arrived from Mars, and a few seconds later he made me switch seats with him.