As I was packing up, an American Goldfinch dropped in to feed on the dandelions. They were much higher than he, a problem he solved by walking up the stem until the top tipped to the ground and he could pick at the seeds.

I set out at 10:30 without a firm destination in mind, just a direction. I would travel southeast on highway 42, another quiet, secondary route. I thought about spending a night at (Tommy) Douglas Provincial Park, also on Lake Diefenbaker, but as it was only about 55km away, it seemed like too short a day. The next park was 150km away, which I didn’t know if I felt up to. The only practical place in between to camp would be a municipal site in the town of Eyebrow, a little more than halfway from Danielson.

By the time I got to Eyebrow, it was only 4:30 and I decided to keep going, as the Buffalo place sounded more interesting. Unfortunately, the wind (in a rather abrupt change from the past week) has shifted, and was now blowing from south-southeast. It wasn’t a strong wind, but I was heading straight into it, and combined with my own speed, added challenge.

After the town of Keeler, I spotted a pair of Willets on the bank of a marsh and stopped to observe them for a while. This turned out to be quite interesting, as I had an opportunity to observe them copulate, which was the most excitement I’ve seen for some time. Also along the way I saw some Eastern Kingbirds.

I arrived at Buffalo Pound Provincial Park at 7:15. I am the only human in the entire place. Very quiet! I don’t usually light a fire when camp, but I did this evening, for a change. It had been quite a cool day, and I was feeling a bit chilled at the end, and this warmed me as I prepared my dinner.

Birding has been very good since I left Saskatoon, and I can already see that it will be good here too, judging by the numbers of birds passing through my campsite (and singing around it). 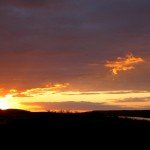