As I departed Banff, it occurred to me that I should stay an extra day to rest the irritated right Achilles tendon. It is the only part of my body that I have ever really injured, besides a little whiplash and some unfortunate hair incidents. Twenty years ago (astonishingly, I was twenty at the time) I slipped on some shag (!)carpeted stairs and tore the tendon slightly. I was on crutches for a week or so, and it was fine after that. It has never given me any trouble since, despite activities such as running, racquetball and Wreck Beach stair climbing.

Nonetheless, I carried on. I took highway 1A, rather than the Trans-Canada, which again was a good choice. Though longer, it is scenic and quiet. Less motorised traffic is always more pleasant. Except for a couple of magnesium processing plants, it crossed much first-nations, mostly rolling, grasslands.

As usual, it was sunny and hot, but thundershowers had been predicted. Ahead of me I could see two large black clouds spewing sheets of rain and occasional bolts of lightning, with a clear space between them, roughly where my highway was headed. The clouds seemed to be moving north, but barely moving at all, so I thought I might make it through the gap. However, about 25km west of Cochrane, the southern cloud moved over me and the rain hit. I stopped and put on my rain gear, but by the time I was finished, the rain were abating. Five minutes later the sun was shining again. 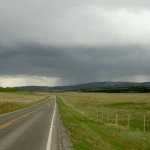 I had thought that I would stop at Canmore or Cochrane, but the former was uninspiring and the later was close enough to Calgary that I thought I may as well go all the way. I arrived on the outskirts of Calgary at about 6:00, but I wasted an hour looking for a route downtown that doesn’t involve a shoulder-less freeway. Eventually I gave up and just took the Trans-Canada into town, to the chagrin of the traffic behind me. I found a couple of “bike route” signs, but they inevitably ended up at a dead end or otherwise nowhere, with no continuing signage. I chose the Calgary hostel as my bed for the night.

By the end of the day, the Achilles was quite sore, and it now has a tender lump in the middle of it. I guess I will be resting in Calgary until it’s better. Just as well, as I have relatives here I can visit.