Dick Cheney, and the ideological divide

Last night I went to the Vancouver Club to demonstrate my opposition to the presence of former United States Vice president Dick Cheney. Cheney, who has recently published a memoir titled In My Time: A Personal and Political Memoir, was invited by the “Bon Mot Book Club” to address the club’s members.

I don’t go to very many public protests, because I don’t much like them. This has has more to do with temperament than judgement: I simply don’t like crowds, regardless of whether a crowd is pleased or angry. While a pleased crowd is generally less frightening, I find many crowds far too inclined to herd mentality to be worth the deprivation of my solitude. I’m not just talking about protest crowds: a crowd of sport fans, church parishioners, or family members have just as much potential for uncritical group-think when they gather.

Nevertheless, I felt compelled to attend this demonstration, as I believe Dick Cheney should be tried for crimes that contravene international law, particularly the United Nations Convention Against Torture, which was signed by Cheney’s former boss (or puppet, depending on your point of view), Ronald Reagan. Canada, as a signatory to this and other anti-torture conventions, has a moral (and possibly legal) responsibility to either deny Cheney admission or to turn him over to the International Court of Justice (to which a formal complaint against Cheney is outstanding).

By attending the protest, my goal was to express that opinion in a public way, and to express to the Bon Mot Book Club members that welcoming an alleged (and apparently self-confessed) criminal is, at best, a poor choice of dinner guest.

Unfortunately, I was disappointed to find myself in a crowd comprised of many people who were more inclined to this sort of behaviour. I stood toward the back of the crowd, held my sign, and smiled politely at anyone who looked my way. I stayed until it was apparent that all the event ticket holders had arrived (and the media trucks had left), and then I departed, content in having expressed myself. I’m not necessarily opposed to more aggressive action when it is warranted, but stopping Cheney from talking wasn’t likely to save any lives or prevent any tortures at that moment and, at any rate, he has not yet been convicted of anything.

While at the demonstration, I took a couple of pictures with my phone and uploaded them to Twitter. I don’t usually do this sort of thing, but I’m trying to make at least some attempt to keep up with modern communication methods. It’s pretty much the only way the younger generations are communicating these days, and it seems to me that my refusing to play won’t have any detectable effect on the march of technological change (for better or for worse), but will serve to further isolate and lessen the impact of my cultural relevance (such as is it).

Upon arriving home, I found that my Twitter picture, which was accompanied only by the words “Cheney protest”, had been referred to by a Twitter user by the name of FACLC, a fellow in Alberta who considers to himself to be the love child of conservatives Richard Feynman and Ann Coulter. FACLC (whose alleged birth circumstances, I feel, perfectly justify his henceforth being referred to as “The Bastard”) apparently picked five people at random who had posted a reference to Cheney and called them all leftists with an “irresolute commitment to free speech”. Offended at being assigned the simplistic label of leftist, as if that single word somehow sums up my entire identity, and the suggestion that I was stifling free speech by exercising my own, I exchanged a couple of messages with him before I looked at his website and discovered that he’s one of those people for whom a position on anything that’s to the left of his must necessarily equate to communism.

I have to admit, while I was at the demonstration, I had a moment myself of feeling irritated by what I perceived to be the portion of the crowd that I sometimes, unscientifically, identify as being the “loony lefty rent-a-crowd”, the ones who show up to any demonstration that’s against anything. These are often the ones, unfortunately, who hold the bullhorns and scream incomprehensibly about contrails, Bilderbergers, and how 9-11 was an inside job. Some of them have a lot of time, energy, and emotion, but not a lot of critically informed focus, and some, I suspect, are simply members of our community who are struggling to find the right balance of medications with which to treat their mental health conditions. (They wouldn’t, of course, be so noticeable or command so much attention if more of the rest of us were inclined to do the work that we have apathetically left to them).

Looniness, however, is not restricted to those on the left. Dominating most of what passes for forums of public political dialogue these days (ie: the comment sections of news websites, or The Bastard’s Twitter feed), is a hugely energised crowd of people that I must refer to as the “loony right”. Somehow, anonymity and technology seem to inspire them to compete to see who can hold the most rightward of views, however insane or destructive, as if they’d collectively decided to  campaign for the return of western civilisation to the tenth century, but with internet, despite the likelihood that they would end up among the peasantry, or worse.

I don’t consider myself either a leftist or a rightist, and I don’t really care much about where The Bastard or anyone else would place me on that spectrum. Really, my reaction is about being labelled at all. I prefer to be free to arrive at my opinions independent of where they will situate me on the political spectrum or whether by holding them I’m contravening some party’s by-laws. If I have to be confused with one or the other, however, I’d rather be confused with the lefties, who at least seem to be motivated by the desire to build, rather than dismantle, civil society, even if their methods are sometimes misguided.

About the Bon Mot Book Club

If you’ve never heard of them and are wondering how you can join, well, forget it unless you’re rich, Conservative, and, most likely, white. More than one of their members endorsed conservative Liberal (explain that to your American friends) Kevin Falcon in the leadership race won by that “left-liberal” (as BC Conservative leader John Cummins refers to her) Christy Clark. Membership is by invitation or personal referral only, according to their website. If you want to cozy up to someone with referral privileges, try joining the West Vancouver Conservative Party constituency association, where Bon Mot founder Leah Costello is a board member. Or maybe you can petition the Globe and Mail, or the TD Bank, both of whom sponsor the event.

As book clubs go, this one isn’t what you’d call “literary”, so don’t expect to be reading any Proust (or Atwood, I suspect). Most of the books they dine in honour of (I’m reluctant to assume that they actually read them) are probably written by ghost authors.

It’s interesting that Leah named the group Bon Mot, French for “good word” – which is somewhat evocative of The Bible – yet is happy to celebrate someone willing to torture and kill people in the relentless pursuit of profit for his oil company masters. So Christian! Also amusing is Leah’s French pronunciation. If you watch the Bon Mot promotional video you’ll see her at the lectern pronouncing it as the “Bonn Mott” book club. Hearing this made me even happier with the sign I made for the demonstration: 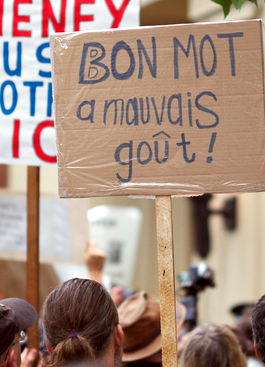