The perils of spandex

I was up at the crack of dawn, for a soak in the hot tub and a dip in the pool before breakfast. However, I wasn’t on the bike and riding until the crack of noon, after all the eating, packing, and saying goodbye. It was a beautiful day, almost completely clear, and minimal winds (though the winds that did come were, naturally, headwinds). As I had left so late, I rode right into the evening, when it was cooler. The road was also very quiet at that time, so it was quite pleasant.
I stopped in Vernon for lunch, where a very elderly woman tried to pick me up outside the health food store while her withered husband waited with a grumpy look on his face. Sometimes wearing spandex is dangerous.

At about 6:00pm I stopped in Enderby (birthplace of the writer Crystal Williamson) for tea at ‘Cliff’s Coffee House’. Though I had heard that the town had only one traffic light, I found that there were actually two – the second one a pedestrian light that had been added recently, according to a very friendly and talkative Enderbian I met at Cliff’s. About a block past the second traffic light I got my first mosquito bite of the trip.

I had intended to stop and camp along Mara Lake, but as I was still in psycho-cycling mode, I just kept going until I reached Sicamous at 8:30. It was almost dark when I got there, and the adrenaline was wearing off. The target campground was about 10km east of Sicamous, and as it was late and there was no actual guarantee of it being open when arrived, I wimped out and stayed at the Monashee Motor Hotel.

For some reason, I was covered in road dirt when I got to Sicamous, so the hotel shower was welcomed. I had a huge dinner of macaroni and cheese at the “Husky House Restaurant”, a 24 hour truck stop diner operated by the gas station across the road.
Somewhere near Grindrod, I think: 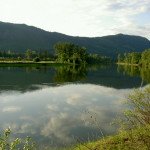