Here I am with my uncle, Phillip, just before embarking. His partner Elaine took the picture. Note the truckload of future firewood behind us that I avoided stacking by leaving on this trip: 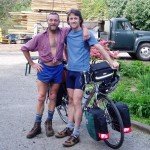 Stopped at Wenting’s again for my kickstand. I don’t usually like kickstands, but when the bike is fully loaded, it’s hard to get it to stand up without falling over when it’s leaned against a wall or something, so it’s worth the extra half pound. Beautiful sunny day! Lunched near Aggasiz.

Stopped in Hope for tea at the Blue Moose (a road trip tradition for me) and a few groceries. I met two women from Montreal (Faustine et Josephine) at the grocery store who had taken the train west and were cycling back to Montreal. Info about them at www.leventdansledos.ca.cx. If you’re as woefully unilingual as I, you won’t be able to read their trip notes, but there is an English summary. They are promoting the Kyoto accord and gave me a sticker indicating that my vehicle emits zero emissions, which I stuck to my fender. Perhaps I’ll run into them again before Montreal.
As it was getting dark and cool by the time I got to the top of the hill to the Hope Slide, and there were no visible sources of water around, and as I was lazy, I stayed at the Sunshine Valley B&B, run by John & Ilona Bristow. I learned a lot about the area from John – for instance, Sunshine Valley was originally a Japanese-Canadian concentration camp during the war, though at the time it was called Tashme.