232.78 degrees is the celsius equivalent to, according to Ray Bradbury, “the temperature at which book-paper catches fire, and burns …“. It is assumed that that was the temperature at which my journals burst into flame when I applied a match (and a quantity of corn oil) to them during a late-night beach bonfire last evening, although the motivation behind the inferno was far less nefarious than Bradbury’s imagination described.

The burning of my journals, rather than being an act of censorship, was one of convenience and peace of mind. There were 19 of them, totalling approximately 1,900 pages, and the’d become a bit heavy to be lugging around the world. Though no longer present in ‘hard’ form, they still exist in digital, as I spent several hours last week capturing images of their pages for posterity (for future Smithsonian study, surely!) Here is a photo of the altar on which I sacrificed these volumes of personal philosophy: 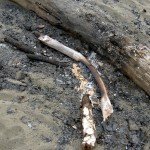 Now that my load is lightened, I will depart tomorrow morning for San Jose, to be followed by a flight to New York the following day.