It was a long, cold winter, with very little cycling. I doubt I exceeded 50km in total since last fall.

Oh, I had intentions to bundle up and cycle anyway, like I did the winter I spent in Toronto and cycled almost daily. A couple of things are different, of course. Perhaps most significantly: I was then twenty years younger.

The first warm Chinooky day in March, I cycled up and upon Nose Hill, which is conveniently near to my abode. There’s not much up there to see besides grasses, rocks, deer, rabbits and a few birch thickets in the gullies.

Stanley Park it’s not, but it’s somewhere to go in Calgary that isn’t a shopping mall. You don’t really feel like you’re out of the city, though, for the view of hectares of sprawling suburbs is unimpeded in all directions, broken up only by downtown and the airport.

Now that the weather is a bit better, though, I can leave the city on my bike and enjoy a reduced likelihood of hypothermia. Yesterday, I did that for the first time.

I decided to head west, mainly because I had the clearest sense of what to expect, but also because of the wind. In these here parts in the fairer months, mornings tend to be relatively calm, and winds tend to pick up later in the day, usually from a westerly source. Ideally, I would leave early to beat the wind, ride west, and then when I return home have the wind at my back.

Unfortunately, because I work nights and therefore tend not to wake up particularly early, and because I needed to fix a flat tire before I left, I didn’t end up leaving the house until half past noon, at which point the winds had already picked up (15-20 km/h, gusting to 25, according to the weather app). 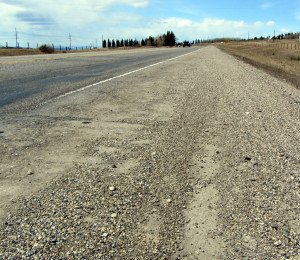 As I learned from my ride up Nose Hill, a leg cramp and the near coughing up of a lung indicated that my level of fitness had, indeed, weakened somewhat over winter, so I decided to just ride west until I started to feel tired, and then turn back. I rode south, through older suburbs which were mostly sheltered, but as soon as I turned west on to Highway 8 I was met with the full force of the winds. I tucked my head down, put on some music, and plowed on.

Though Highway 8 has only one travel lane in each direction, it has wide shoulders, but I was somewhat disappointed to discover the condition of those shoulders. Rumble strips, somewhere between eighteen inches and two feet wide (and set about six to eight inches to the right of the white line) take up half the shoulder. The other half of the shoulder is covered in accumulated sand from the winter sanding trucks. Not only did I have a strong headwind, but I had to either ride through sand or over rumble strips, either of which is a further impediment to speed.

Fortunately, once I got beyond the official city limits, the quantity of sand diminished considerably. Perhaps the provincial highways department is much more conservative in its application than the city workers. 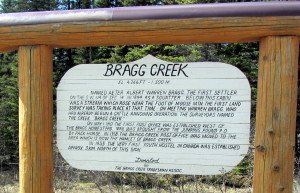 It took me three and a half hours (including a total of about 30 minutes of roadside pit stops), but I surprised myself by fighting the headwind all the way to Bragg Creek, 48.3 km from my front door.

If I thought Calgary is a bit under-inspiring, Bragg Creek is certainly no competition. I understand it’s quite popular with cyclists in the summer, though about all it seems to have going for it – besides being a good cycling distance – is that it is somewhat near to various Kananaskis recreational sites.

I rolled in, ate a $14 cheeseburger, and then turned around and headed back to the city.

The ride home was much more pleasant, thanks to the tailwind. I was back at my front door in only two hours and fifteen minutes.