Boil me in my own pudding!

December 23, 2007/hedley bontano
“Why does Scrooge love Rudolph the Red-Nosed Reindeer?
Because every buck is dear to him”. — Unknown

As is well known among those who have long felt an inexplicable desire to suffer my company during the darker months, I am not an enthusiast of the holiday in which we are currently immersed. I don’t erect a tree, I don’t hang lights in my windows, I think eggnog a vile substance unsuited to human consumption regardless of the quantity of rum with which one dilutes it, and I have largely recovered from the social guilt that in the past has compelled me to prepare and mail to my friends and acquaintances the pulped remains of the boreal forest. (Evidently, I have not yet abandoned a propensity for lengthy sentences. Welcome to my Henry James Christmas story.)

This year, however, I fear that I may be having some sort of mental breakdown: I’m feeling unusually charitable.

I’m not especially fond of clothes shopping, so I generally leave it until it becomes a necessity. As misfortune would have it, my last pair of 501s decided to burst apart (no, not in the chilly California sand) five days before Christmas. As I said, I don’t shop very willingly, and I certainly don’t set foot anywhere near a store or mall after Halloween for fear of encountering horrors such as the Backstreet Boys Christmas Album playing on an endless cycle. They say that suicides increase at this time of year, and after my experience working in a mall a number of years ago, I’m convinced that these are largely comprised of retail workers pushed beyond the limits of aural human endurance. Waterboarding has nothing on Celine Dion wailing Adeste Fideles.

Not surprisingly, it was with some apprehension that I set out to buy more jeans on the evening of the darkest night. As solstice rituals go, mine seemed ill-advised. I’d rather have been dancing around an evergreen, clad only in ivy and toasting the moon with a hogshead of the blood of the sacred grape, but it was either now, or January, for I’d sooner stroll about Vancouver naked than set foot in a store during ‘Boxing Week’, and I kind of wanted the trousers earlier rather than later.

I began to sense that something was amiss at the bank, where I held the door for someone behind me and – get this – smiled. Then, waiting for a red light to change (an out of character incident in itself) on Howe Street, I found myself making smiley-faces at a pram-bound infant gawking at me with wide-eyed interest, until his or her presumed parent caught me and I was forced to hurriedly turn my head to check the status of the walk signal.

I went to The Bay, for not only can I get into it without entering the evil mall, I know which door to enter that doesn’t require either that I walk through the cologne section or have to use an escalator to get to the Levi’s section. As luck would have it, the 21st turned out to be one of only 362 days in the calendar year that The Bay gives out Scratch and Save cards, and spending less on clothes is for me second in popularity only to wearing none of them at all. As I was there anyway, I decided to buy three pairs of pants, and some socks (spending roughly 20% of my 2007 income, I might add, somewhat proudly). Naturally, I was also given what surely must be my 17th Bay credit card in order to enjoy an additional ten percent off of my purchases. You’d think they’d eventually clue in and stop giving me these cards, as when they eventually arrive in the mail, I cut them up and toss them, never to be used. Cash is everywhere I want to be.

I must digress briefly on the subject of Scratch and Save. There are three possible discount amounts to scratch: 30, 40, or 50 percent. I’ve always suspected that cards providing fifty percent are severely limited, if any exist at all. As I was mindlessly scratching my card to reveal the predicted 30%, the woman behind me engaged the cashier in a discussion of the topic. He said to her, “We departments all compete to see who gets the 50%”. Characteristically silent until this point, I burst forth with almost a shout, “Aha!”. Beaming in victory, I turned to the woman behind me and said “You’ll notice that he said the 50%.” Everyone in line had a good laugh at this.

Picture it. There I was, standing in a long line at a cashier in a department store, buying clothes, four days before bloody Christmas, and engaging in jocularity with my fellow Gomorrahns.

I swear, during the whole journey from home to store to home, I didn’t once scowl at a soul, or mutter under my breath, with Tourette-like articulation, about the third-world schlock with which we purport to honour ‘our’ christ. In fact, on the way home I stopped at a bookstore for a couple of novels, and afterward I was a block away from the store before I realised that I was humming I’m Dreaming of a White Christmas.

Now, I’ve been having some unusual dreams lately, but I don’t recall any with Sim-like characters dragging me unwillingly through traumas past, present and future. Most of my dreams have been more satisfyingly Bacchanalian in theme than reminiscent of Ezeqielian repentance. (Is that a word, or is my attempt at classical metaphor ridiculous?).

Perhaps my apparent conversion from Christmas-sceptical grump to, well, Christmas-sceptical sorta-cheerful, is less a vision-induced submission to something about which I am inherently and decidedly unenthusiastic, and more a result of just having been to a few more fun, satisfying and highly social seasonal parties this year than usual. Or maybe I am actually undergoing some sort of fundamental conversion, the culmination of which is yet to be known. As I once said, “I think I’ve done just about everything I said I’d never do”. So who knows? I do, however, remain sceptical.

To all my friends, a Happy Solstice! 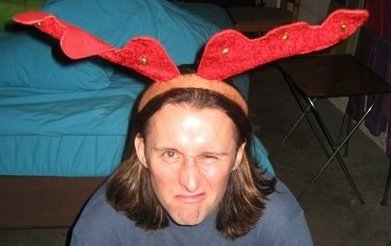