When I woke up, I looked out the window, turned on the television weather station, and then packed and left (after a hearty breakfast!). It was overcast (mostly cloudy), and the wind was out of the south-west. This was fine until I reached Dauphin to the west, but then I turned south, destined for Riding Mountain National Park. The park is only about 30km or so from Dauphin, and once in the park, the trees blocked the wind, which made things much more pleasant.

Should you ever find the opportunity to visit, I think Riding Mountain is the nicest Canadian national park that I have visited (so far). Quiet, little traffic, scenic, ecologically diverse, and lots of wildlife. I had originally planned to camp at the Moon Lake campsite (halfway through the park), but when I got there I found that not only was it utterly deserted, but there was a sign up advising that there was no potable water. I usually enjoy an empty campground, but I tend not to sleep as deeply in bear country when I am completely alone with nowhere but a tree in which to stash my food. Call me a wimp, but if a mouse burps in the middle of the night, my eyelids snap open. However, I have no problems if there is another victim around as well.

Riding Mountain is at the southernmost point of boreal forest in Canada, most of it being further north. Here is an example of a modern boreal forest: 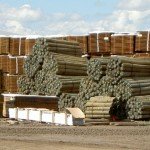 In the few hours I spent riding through the park, I saw three bears, three moose, many deer, a coyote, and some recently hatched Common Goldeneyes. The first large wildlife I saw was on the Boreal Trail, a 1km trail through a wetland. On the way in, I met a couple from Los Angeles who were all excited because they had seen a moose cow with two calves, and told me to watch for them. So I set out on the trail, peering into the brush looking for the moose, not making a lot of noise, as I didn’t want to scare them off. Not far along, I rounded a corner and found a large black bear, only ten metres from me, sitting in the grass foraging, or shitting in the woods, or whatever bears do. The first thing that popped into my head was “take a picture”, but this was quickly replaced with the more sensible “keep moving”. As I continued along, glancing back occasionally to see if the bear was pursuing me hungrily, I saw that he had stood up on his (or her?) hind legs to watch me, but did not move. It was a circular trail, so I had to pass quite near to the same spot again, so I made lots of noise as I walked. The bear was gone when I returned. I never did see the moose calves.

While riding again, I saw two moose cows, one at a distance, and the other on the roadside as I rounded a curve. Big things, they are. I found a very scenic bit of waterway, with a little ridge over which ran the water into another waterway. I stopped to take a picture of it, but as I stood there on the side of the road, I heard a rustling behind me. I turned to see a large bull moose, eating tree leaves on the other side of the road, close enough that I could see the whites of his sizable eyes as he watched me while he ate. This I took a picture of:

After that, I departed before he decided that I was usurping his territory.

The next sighting was about 20km from the end of the park, when I was riding down a small hill. At the botton of the hill, the road just dipped and then went uphill again. Right at the dip, 10 metres from the roadside, were two black bear cubs, with a sizable mother behind them. I stopped as soon as I saw them, when I was halfway down the hill. The cubs continued eating, but the mother heard me and looked up. Should she choose to chase me, I was a bit stuck, as I’d never escape back up the hill. However, she didn’t move, just watched me warily.

I was on a section of road where the boulevard between the northbound and southbound lanes is so large that you can’t even hear any cars on the other side. I decided that the best course of action would be to wait for a southbound car to come , and then start riding past the bears as the car passed them. However, after ten minutes, there were no cars, and I got tired of watching the baby bears eat, so I just decided to give it a run. I pedalled quickly down what remained of the hill to get a good start on the incline. I was not pursued, though, as the bears all fled when they heard me coming.

Here’s a photo that shows the typical view in the park: 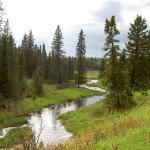 I arrived at the Wasagaming campsite later in the evening. It’s one of those typically “national park” style campgrounds that inspire me to rant on the irresponsibility of what I refer to as “the proletariat”. Why people want to get away to the “great outdoors” just to litter, destroy trees, and make as much noise as possible I just don’t understand. Why don’t they stay in the municipal campgrounds, and leave the parks to the civilised?

The place was almost empty, but as usual, beer bottle tops littered all the sites and nearby foliage had all been hacked up with Canadian Tire hatchets to make kindling, or just to leave marks on the trees. It was pretty quiet, until 3:00am, when someone decided they needed to light a fire. In order to supply the fire, they apparently needed to chop a cord or two of wood, as I was listening to chopping until 4:30. I sleep better when all I have is flatulent rodents to deal with.
However, I will refrain from ranting on this occasion.