From the plastic Adirondack chair in my backyard, the one in which I have been sitting and contemplating the world for several years, the one that has a cracked seat that (I have discovered through painful experience) one should never recline upon while wearing a skirt sans culottes, I now have a new sight upon which to gaze: a chicken coop. 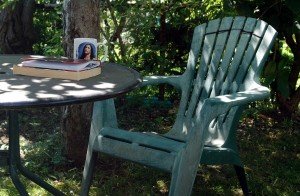 It’s never been perfectly clear to me why the keeping of chickens in the city was at some time in the past made illegal. I suppose in the very early days of the city, when more distinct lines were being drawn between urban and rural, it was decided that chickens simply no longer belonged.

I suppose also that race and class were significant factors, as those most inclined to keep chickens in the city in those days would likely have been those of lower socioeconomic levels, and those of minority ethnic origins. As the people writing the laws are usually the more privileged members of society, banning small livestock would have been another way of keeping a cultural thumb on the ‘classless ethnics’.

Of course, the lawmakers would undoubtedly have argued the discrimination claim, were one raised, since the no-chicken laws applied equally to all Vancouverites, regardless of race or class. Realistically, though, I imagine that the anti-chicken law would have applied almost exclusively to Vancouverites living on the working class and heavily ethnic east side of the city. Meanwhile, wealthy and WASPy equestrian enthusiasts on the west side remained free to keep their horses (though admittedly for the most part these days, not in their actual backyards).

Last year, the City of Vancouver finally legalised the keeping of chickens on residential properties, a change for which I’d been speaking in favour for many years. This was not without controversy, principally because certain political forces used it opportunistically, in the run-up to the last election, as a cheap means to attack the mayor who changed the law. 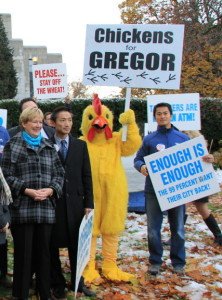 Suzanne Anton, the opposition candidate, took every opportunity to ridicule chicken keeping, even posing outside of city hall shortly before the election with someone dressed in a full-body chicken suit. As it turned out, the only thing that looked ridiculous was Anton herself and she went down in flames on election day. Though I’m not particularly a fan of the man who beat her, Vancouverites certainly made the right decision in rejecting Anton, a flip-flopping political contrarian who one suspects would have campaigned in favour of cancer if her opponent had come out against it.

Despite being in favour of city chickens, and despite being in possession of a genetic predisposition to small-scale agriculture, and despite being a classless low-bred ethnic (of the bastard-Celt-ish-offspring-of-Norse-and-Roman-rapist variety), I had no plans to keep any of my own, commitment not being one of my stronger traits. I don’t even like owning a chesterfield, so determined am I to be unweighted by difficult-to-move tangible assets.

But then, last year, I found myself in the unfamiliar circumstance of being relatively settled and in possession of a yard. I was already keeping a vegetable garden, so adding chickens to my city farm became a theoretical possibility. Nevertheless, I was still resistant, largely for the same reason that I didn’t want a dog or cat (or a child, for that matter): I didn’t want to have to deal with having to find a sitter when I wanted to travel.

And then my neighbour got chickens. “You should get some too,” she said. “We can chicken sit for each other.” Though the sitting problem was somewhat mitigated, I still wasn’t convinced.

Shortly thereafter, I was offered some chicks that had recently been hatched by an elementary 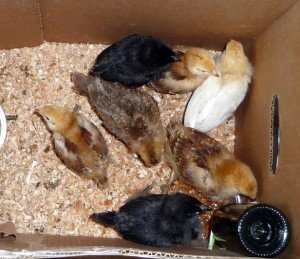 school class in the Fraser Valley. “What the hell!” I said. “If I want to go travelling and can’t get a sitter, I can always put them in the freezer and make soup when I get back.” A few days later, the chicks arrived.

Now, the city has of course established a set of rules about keeping chickens. Perfectly reasonable. Among these rules are that residents are limited to four chickens, which must be female and four months of age or older. Since chicks are, by their nature, less than four months of age, and since most breeds are not easily sexable at that age, and since statistics indicate that 40% of eggs will contain roosters, and since I was in possession of seven chicks, I was clearly taking a few (temporary) liberties with the by-laws. In time, it would become obvious which chicks were roosters, and once that was known I’d be able to either return them to the farm, or whip up a nice pot of cockerel soup, and then be in compliance with the by-law. Or at least most of it.

In the meantime, I set about constructing a coop. 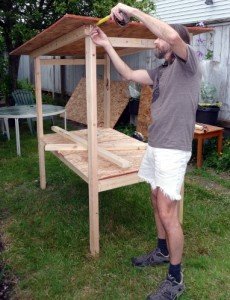 I didn’t do much planning. I sketched out more or less what I thought it should look like and then scrounged up a bunch of wood I’d been keeping in the basement for some rough storage shelves, along with a few discarded pieces found in the alley. In the yard, I cut and hammered and screwed, improvising as I went, until a coop took shape. The location possibilities were limited, but I decided to give up the far side of my garden, for that section of soil hadn’t been terribly productive anyway. I’d built the coop in the middle of what passed for a lawn in my yard, and it was too heavy to carry, so I fashioned a couple of wheels on to one end of the base and then rolled it into place like an over-sized wheelbarrow.

Then, finishing details began. I’d built it on stilts so that the hens would be able to take shelter from the rain when out-of-doors, along with a trapdoor in the floor and a small set of steps to the ground. I installed a couple of roosts using a scrap piece of round fencepost, built a single nest box, and constructed a two-part door that can be partly opened to access eggs, feed and water, or removed entirely for coop cleaning.

Next, I built an extension run, so that the hens would have extra ground to wander about on, and then I enclosed all external areas with quarter inch screen in order to keep critters out, such as skunks, raccoons, coyotes, cats, and – especially – rats. (If only my basement were as secure).

I then moved the chicks in, and ran an electrical wire out from the house to power a warming light to keep them comfortable until they were fully feathered. Later, it was replaced with a low-wattage bulb and a timer was added, so that the light comes on in the early morning until sunrise, and again from sunset until later evening. This is to maintain egg production (and, of course, to keep my hens from getting Seasonal Affective Disorder, this being Vancouver and all). 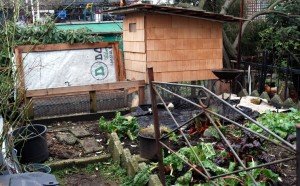 I picked up a load of cedar shakes that my chicken-farmer uncle in Mission had generously donated to the project. I covered the external walls and roof with plastic lumber wrap, as a moisture barrier, and then attached yellow cedar shakes to the walls and red cedar shakes to strapping on the roof.

Finally, I installed a couple of padlocks on the external openings in order to keep out the most dangerous predators of all: humans. Especially the neighbourhood kids.

Now, the chickens are pretty much grown. Besides grain, they eat the vast bulk of our compost. I dump it in their yard occasionally and it vanishes completely in minutes. Sometimes, I let them out to scavenge for bugs and grubs in the yard.

The girls are now providing eggs at full productivity: about thirty eggs a week. The by-law prevents me from selling the eggs, but I’ve taken to selling my friends egg cartons. Sometimes, I thank them for their business by giving them a few eggs, too.

Even so, here’s what my fridge looks like at any moment:

As I mentioned earlier, the city has made several rules and recommendations about chickens, most of which I agree with. Since the average city dweller has probably never seen a chicken that didn’t come either on a Styrofoam tray or in a cardboard bucket, some guidelines are certainly in order. However, I don’t necessarily plan to follow all the recommendations. I’ve spent a lot of time on a farm, and the idea of taking my chicken to a veterinarian to be euthanised when it gets elderly seems laughable – more likely, I’m going to take it to the basement for a neck adjustment when it’s still tender.

And what’s with the “chicken registry”? If my neighbour can stockpile an unlimited number of shotguns without even having a requirement to register them with the police, I’m sure as hell not going to register a god damned bird.

Of course, ensuring humane treatment is something I support entirely, but the apparent interest in animal protection, as it applies to domestic chickens, seems a bit uncharacteristically assertive when you take almost any other animal into consideration (with the exception of purse dogs, which have all but been elevated to saint status in the city and get better health care than any human citizen). For instance, if the city applied 2% of its concern for chickens to cats, perhaps the streets wouldn’t be overrun with skeletal semi-feral felines.

And what of non-domestic chickens? A code of treatment for home birds is great, but two blocks from my house is the Hallmark chicken plant, where it seems a lower standard of husbandry is and has for some time been overlooked. In former years, you used to see huge trucks loaded with battery cages hauling tortured-looking, near-or-past death birds down Hastings Street. It wasn’t uncommon to see feathers on the road that blew off the trucks, and occasionally chickens were known to make a break for it before reaching the guts of the plant, such as the lucky rooster described in this Courier article.

These days, the trucks are covered so that you can’t see the carnage, and the plant has been enclosed so you can’t see into it, either. Chances are, though, that it’s the same chicken hell today as it was then. The building doesn’t even have a sign on it now, presumably in the hope that people will forget what it is. It’s hard to forget, though, on hot summer afternoons when there’s a scant breeze from the north and the smell of death settles over the neighbourhood.

My chickens, even if they become soup a few years from now, will have lived a far, far, far better life than any of those being trucked into that plant, and the same is likely true for most chickens that take up residence in the city’s backyards.

Next on the urban farm agenda: beekeeping.