At least it’s not snowing

If every day was like today, I’d have packed it in and flown to Costa Rica by now. When I got up this morning, it was quite cool, and fully overcast (it had been clear and mild when I went to bed). I had breakfast and was packed and ready to go by 9:00. I had put on my rain jacket and water-resistant pants, just to keep warm. As I got on my bike to leave, I felt a drip.

I waited to see what would happen. I don’t like to over-react, otherwise I end up going to all the effort of digging out the rain gear and suiting up, only to find it’s just a brief shower. A few more drips. After a few minutes, the drips had become a light drizzle. Since the sky was solid grey, I unpacked the real rain gear and put it on. I left at 9:30. Before I was three blocks away, it was pouring.

I resigned myself to a day of rain, not too upset, as I have been very lucky so far. Everyone I meet tells me that it has been raining in Saskatchewan for two solid weeks, but this is the first I have seen. It might, of course, be like Vancouver, where it will be dry for ten straight days, and when it finally rains everyone whines “all it ever does here is rain”. (And they say I’m negative).
I rode eastbound on highway 10. The first thing I noticed is that yesterday’s north-easterly wind had become an easterly wind, with increased velocity. I remember before I left home – so many people telling me how I’ll sail across the prairies, barely needing to pedal, pushed by the winds at my back. What rubbish! I had a tailwind from Banff until Calgary, a cross-wind from Stettler to Biggar, and it’s been cross- or headwinds ever since.

Seven kilometres out of town, I got a rear flat. As you will recall from yesterday, this is a brand new tube. In wind and driving rain, I put another brand new tube in, reassembled the load, and carried on, now with numbed fingers. Three kilometres later, it’s flat again. I decide to walk the 10k back to town, and sort it out, figuring that I’d probably need to stay another night and start again Wednesday. After 5km, a nice guy with a truck stopped and offered me a lift to a bike shop.

As we rode into town, he asked me where I was from, and when I said Vancouver, he told me a story about the time he went to visit a friend in Fort Nelson. This often happens when I meet people in small towns. One woman said “Oh, you’re from Vancouver, what a coincidence! I lived in Kamloops for two years back in the 80’s”. Anyway, the guy in the truck reported that he hadn’t enjoyed the trip, as the scenery was nothing but rocks. Uh, you mean the Rocky Mountains?

Anyway, I went to the bike shop, and I decided that the problem may very well be he tire itself, as I can see a couple of well-worn spots on it. So, I bought a new tire. After that, I grabbed a little lunch in town. Recognising that the sensible course of action would be to find a hotel and relax, I decided, since it was only 1:30 and I had eight hours of daylight left, to get back on the road.

What a gruelling ride! The wind seemed to get stronger, and both pairs of my Gore-Tex gloves, as it turns out, are about as waterproof as a sea sponge. My canvas shoe covers don’t seem to be dong much to keep my feet dry, or warm, either. I knew I should have bought the neoprene covers. I have neoprene gloves, but they are buried in the bottom of one of my panniers, and you can bet that if I start searching for them on the side of the road that they will all be open and emptied before I find the gloves.

Thus, within two hours my hands and feet were all soaked, and numb from the cold. But, I think about other things, and carry on, and there isn’t a hell of a lot of choice, besides turning back, which I wasn’t prepared to do.

At about 4:30, the rain stopped, but the trucks that passed were blowing all the residual water up off the road. It was another hour before the roads dried up. I tried to wring out my gloves, but the liners, being fleece, don’t ring out well. I was forced to suck the water out of each finger. After that, they warmed up considerably.

I arrived in Roblin, Manitoba at 7:45, but then I remembered that I am now in the Central time zone, so it was actually 8:45. I checked into the local motor hotel and grabbed dinner at the only place open: “Chicken Delight”. Ugh! The resemblance to actual chicken is purely promotional.

Doubt the power of the wind? Check out my average speed for the day: 14.8 km/hour. That’s six hours and 24 minutes of almost continuous riding (only stopping to drink, eat chocolate, and urinate). Incidentally, I recently weighed my bike at one of the truck weigh scales. 110 kilograms (including rider). That would be a total of 240 pounds or so that my poor Achilles tendon is pushing into to the wind.

The primary thing to note about Manitoba, from a technical-cycling perspective, is that the highways suck! In most places, if there is any shoulder at all, it’s about two inches wide, with a three inch drop to the gravel, which is generally quite soft and quite unsuitable for riding upon with road tires. However, in most cases the width is moot, as there is no shoulder at all, just a white line painted against the gravel edge. Fortunately, I have encountered little traffic, and of that, most motorists have been quite cooperative. I’m not sure if will be as good after Winnipeg (toward the lakes and Ontario), though.

I don’t think the Roblin area riding is held by the Liberals: 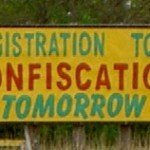 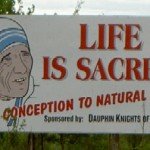