Good morning campground! There’s nothing like country music blasting from someone’s car stereo at 7:00am to start the day, but at least I was up early for a change. Also for a change, I had a leisurely breakfast, featuring raisin granola in skim milk (reconstituted from powder) followed by an apple and some peanuts (healthy, no?), with actual hot tea, or as close to the real thing as one can create in a Nalgene bottle.

I decided to stay an extra night here at Fawlty Acres, partly because I wanted to be able to visit the Royal Tyrell Museum and environs without having to worry about how long I was taking to do so, but also because, this being the first ‘outdoor’ long weekend of the year, I was feeling a bit sceptical about finding outdoor accommodation (this particular paradise being at capacity).

At about noon I made my way to the museum to look at dinosaur bones. The museum itself isn’t bad, though its target audience is clearly those with children. The actual audience bore this out, as there were more screaming three-foot savages than in Lord of the Flies. I suspect that I learned more about poor parenting techniques than dinosaurs, but I did learn a number of things about the evolutionary history of this part of the world. Miraculously, I was able to endure the crowd long enough to make my way through the entire exhibit without running out in disgust at the state of humanity. Why some people think they should have children just because they possess the ability to ejaculate or ovulate is beyond me, but I suppose there’s another evolutionary lesson in there.

After the museum, I rode back to town via McMullen Island, a bike/pedestrian path on which I saw no other human beings, which was, of course, just fine with me. What I did see, is a lot of sage growing along the path, and an elusive yellow or orange bird that I spent an hour pursuing without getting a clear look. An oriole or tanager perhaps. Also saw a Blue Jay. After touring downtown Drumheller a bit, getting a cup of tea and picking up some groceries, I returned to Club Dread for dinner.

After dinner, I got back on my bike and returned to the river, riding out past the museum almost as far as the Bleriot Ferry, looking for wildlife. I managed to spot a few Tree Swallows, quite a lot of Red-winged Blackbirds, and a dove of some kind. 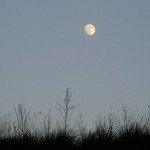