The scenery today was the most beautiful so far. Leaving Lake Louise (that sounds like the title of a Nicholas Cage sequel where he decides to end it all by maxing his Visa card in ‘Saitoh’ outlet stores), I avoided the Trans-Canada in favour of the Bow Valley Parkway, which turned out to be a great choice. For one thing – no trucks. In fact, there was very little traffic of any kind. A quiet secondary highway through forests, with great mountain views, and numerous mule deer foraging along the road, and several bold ravens: 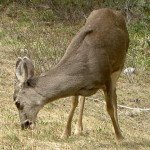 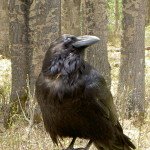 A lot of scenic spots and interpretive displays, and with a short distance to cover, meant that I stopped frequently. In one spot, I found an osprey’s nest below the height of the road, and sat and watched them for a while. There were a huge number of cyclists on the parkway – perhaps as many bikes as cars – though most were a single group from Canmore out for the day.

After four hours in Banff I have concluded that it must house the largest number of Australian service workers outside of Sydney. Check into a hotel or eat in a restaurant and the chances are your server will have an aussie accent. Banff, despite it’s wondrous surroundings, is really just another tourist trap trying to suck money out of visitors.

As for physiology, neither my knees nor ass are hurting, so I guess my body is adjusting. However, today’s pain is in the right achilles.

Before I left Ruskin, I mentioned to Elaine that the battery in my wristwatch, a gift from Focal Communications, had been working flawlessly for four years. The very next morning, it was dead. Though not generally the superstitious sort, it is for this reason that I hestitate to mention that I have cycled across the entire province of British Columbia and into Alberta (1,119km) without once having had to use any of my rain gear. In fact, my right arm is peeling from sunburn. I could not have asked for better weather. There – watch it snow in Calgary now.