I’ve read about it in guidebooks. I’ve discussed it with others who’ve been here before. I’ve absorbed its depictions in books and films. And still, I feel utterly unprepared for it, now that I’m in its midst. Contrary to advice, I decided to spend more than a day or two here, as I anticipated that I might benefit from some aclimatisation time before I begin tackling the trains to other points. Twenty-four hours in, I feel like I made the right decision even as I wonder how I’m going to endure the place for the five whole nights I’m booked here. 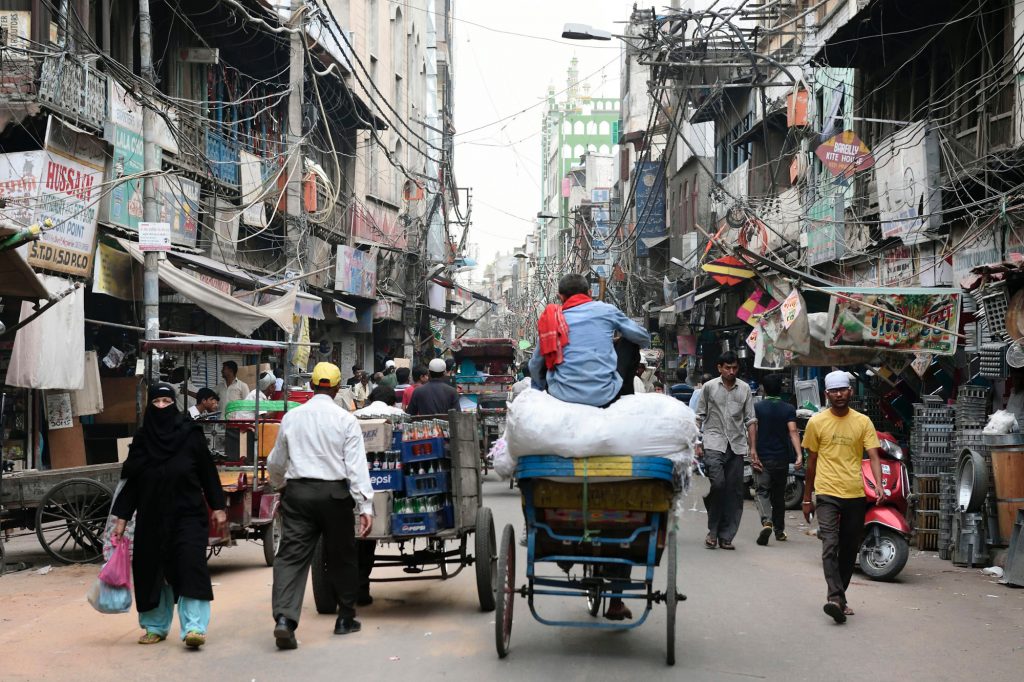 I’ve wanted to visit India for years. Decades even. As a child I didn’t have much imagination about the possibilities of world travel, but India is, in my memory, the first other place in which it ever occurred to me to imagine myself. I don’t know where those ideas came from, but the mythic perceptions of the subcontinent provided to me through popular culture, from an unavoidably colonialist perspective, were perhaps the germ. (I’m here because Bugs Bunny wore a turban and charmed a cobra?)

Or perhaps the two girls I met in (ca.) 1969, when I was in the first grade, were an influence. I was drafted by a teacher to help two “East” Indian sisters, who had been dropped into an East Burnaby elementary school, learn their first few words of English. “Shoes” I would say (with uncharacteristic volume and clarity of anunciation) as I pointed at the sandals that poked out from under their saris. “Sues”, they responded meekly, to my impatient consternation.

I’ve travelled in a number of countries (India is about the 16th), but this is the first in a long time – since I first set foot in Europe – that feels like a significant milestone. There’s nothing particularly difficult about getting here. Get a visa, buy a ticket, endure the flight. It’s more of a philosophical milestone. I can’t quite explain that, yet. What it means, exactly, will be revealed by being here, by thinking about it. By writing about it.

But, for now, back to the moment: Delhi.

It should only take about six minutes – on foot – to get to my hotel from the New Delhi Rail Station, where I was deposited by the Express Metro from Indira Gandhi airport.  Thanks to my having fallen for the most predictable con offered by the touts outside the station, it took me three hours. I could grouse about the touts, but really I have myself to blame. I neglected to print a map of the route prior to my arrival, so when I walked out of the station I knew I only had a short distance to walk, but – what direction?

Along comes a very friendly man in an autorickshaw. He has an aunt in Vancouver he’s planning to visit in February. He showed me her address in his cellphone. He’ll take me to my hotel for 20 rupees. A half hour later, after covering about ten kilometres to reach a point 1.5km away, I’m standing outside a tourist office in Karol Bagh, and he’s holding the door for me. “Go in and get a free map,” he says. I was clued in to the scam by this point. “See ya,” I said, and hoofed it up the road, despite the fact that I had no idea where I was.

After fending off several more very friendly and helpful gentlemen, I managed to find the nearby New Delhi Metro station, which I knew was just a stop away from the rail station, but it had a long queue for tickets, so I went back outside and decided simply to follow the elevated guideway. Along the way, I met a young man named Ricky who expressed an interest in practising his English. In exchange for conversation he walked with me back to the rail station, and then pointed me toward Arakashan Road and my hotel, and wrote down his phone number, in anticipation of a subsequent chai-and-English chat date. 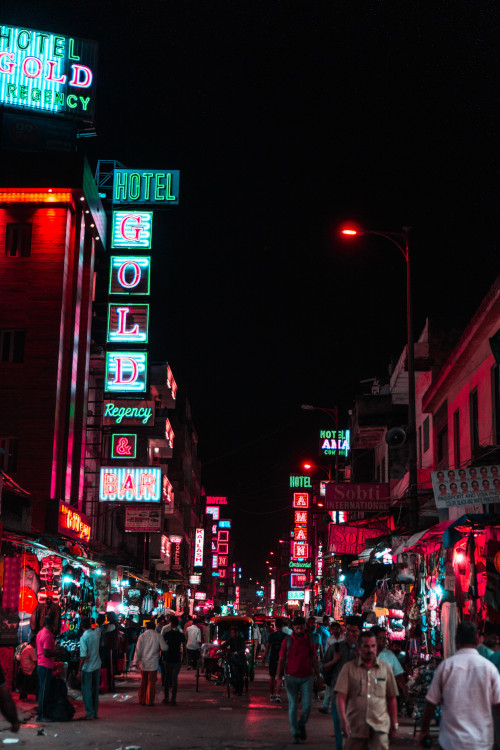 Paharganj by night (Photo by Prateek Katyal on Unsplash)

After we said goodbye, another very friendly and helpful gentleman (who’d been standing nearby when Ricky wrote down his number) ran up behind me. “That man is a bad man, do not trust him. Arakashan Road is that way,” he said, pointing at the same road that the autorickshaw driver had taken me earlier. I ignored him and carried on in the direction Ricky had pointed me, and sure enough, Arakashan Road was close enough that I could have thrown an auto-wallah and hit it.

My hotel is pretty nice. Tiny room, but clean to the point of sterile, and very modern Indian-Ikea in design. Bed seems good. I had a rest, then walked to Connaught Place for dinner at a very popular little Punjabi hole-in-the-wall called Kake Da Dabha. I had chicken curry, on the advice of a guy in line, with a butter naan. It tasted great, but it was an odd piece of chicken. Seemed like the neck and a piece of breast. That hunk of meat in a bowl full of liquid curry and a butter naan cost me 180 rupees – about $3.12. The trick was eating it. All they gave me was a spoon, which was useless for dismembering the thing. Since it’s considered poor manners to use one’s left hand to eat, and since I’m trying to, you know, do as the Romans, I had to pull it apart with one hand. I washed my shirt in the sink before bed.

Yesterday was the day that they counted the ballots for some national pre-elections in certain states, including Delhi. Apparently the Congress (lefties) lost, and the BHP (conservatives) and a new party, the AAP (not sure what their spectrum position is but it seems to be a populist cross-caste commoners movement) won seats. I’m not sure if the noise level was enhanced because of that (in the evening there were intermittent firecrackers in the vicinity of my hotel that at first sounded like gunshots), but Delhi is sure noisy. I knew it would be, but in my imagination I vastly misunderstood the extent of it.

Everyone who drives here – bus, car, autorickshaw, motorcycle, or bicycle – honks pretty much continuously, mostly because they drive like lunatics and are, presumably, warning others of the danger they present. Have you ever seen this youtube video of Delhi traffic? It looks crazy, but the video is actually a tame representation, as far as I can tell. And that’s just my opinion after seeing Sunday’s traffic. Monday’s is twice as crazy. I set my alarm for 6:00am, but the horns were rousing me by 5:00.

Four more nights! Who knows – maybe by the time Friday comes I’ll be sad to leave. At least I won’t be late for my 7:00am train.