Another slow start this morning. I’m just not good at ‘early’. However, I was on the road by about 10:00. A shorter day in distance, but good climbs, and I stopped to look around frequently.
25km east of Golden, my odometer turned over to 1,000, though I didn’t actually notice at the time, as I avoid looking at it during the day – I’d rather be focussed on what’s happening around me than on how far I’ve travelled.

I find I get a bit emotional at certain events when travelling. I don’t mean that I start bawling or an anything, but I do get an emotional feeling that’s hard to describe. I first noticed this when, in 1995, I walked across the bridge from Ottawa to Hull, Quebec. I felt it again when I went to Europe for the first time. Two very different events, but they shared one similarity – I had accomplished something of some importance, if only to me.

I have felt this again on this trip, first when reaching the top of Allison Pass, and again when reaching the top of Rogers Pass. Today, it was when I crossed the Kicking Horse Pass to reach the Alberta border. It isn’t the passes themselves that trigger my emotional response, but that I did something that I had not previously believed, or had not considered, that I could achieve. Perhaps a life well lived would be one that achieves many of these moments. When I consider how many of these moments I have experienced since 1995, I wonder what I have been doing with my time. Was I not achieving notable things, or was I just not attuned to what I was achieving? 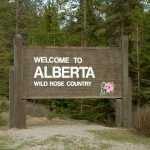 Anyway, I’m off on another tangent. However, these are the kinds of tangents that I enjoy only when traveling, and I hope to have many more. I suppose that this means that I have finally started to relax a bit.

I stopped for lunch in Field, BC. Despite being a tiny little outpost, it has a restaurant of the type usually found in places like Ganges or Tofino – sort of what I call ‘nouveau hippie’. They usually have a good selection of vegetarian options, and the décor is best described as ‘funky’. This one is called The Truffle Pig Café. It has the usual collection of 20-something nubile young staffers who are everything I would have liked to have been when I was young. They get long hair, magic mushrooms and free love. At that age, all I got was a bad perm, Kokanee beer and hairy palms.
I haven’t seen a lot of wildlife on this trip. A coyote, a mule deer, and a dead rattlesnake. Today, however, just inside Alberta, I saw my first bear. It wasn’t close enough that I could be sure, but I suspect a black bear, as it had a greyish hue. Here’s a photo. Look for the blackish dot grazing on the train tracks near the centre (it looked much bigger in real life). 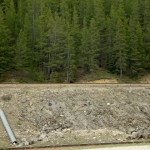 Tonight I am staying at the hostel in Lake Louise. One thing I have remembered about camping, now that I have lugged a whack of camping gear through four mountain ranges: I don’t like camping. I don’t mind sleeping outside and being deprived of conventional comforts, but setting up and breaking camp seems like such a chore. And cooking! I’d just as soon have Power Bars and bananas for dinner than try to cook something. This is why tonight at dinner I had salmon and steamed vegetables, followed by a cup of tea and a piece of chocolate cake. And I didn’t even have to unpack the stove or wash my pot in a finger-freezing stream. Of course, it may throw my ten-year budget out of whack. Maybe I can get back to my frugal goals once on the prairies.